Details of the work done so far to strengthen the relationship between three local governments were revealed today; as the City of Prince Rupert, Metlakatla and Lax Kw'alaams outlined some of the background towards a Memorandum of Understanding today.

Among some of the objectives ahead from the agreement towards increased cooperation among the three governments are:

Common projects that will benefit the residents of Prince Rupert and the area as a whole – namely in developing affordable housing, regional transportation improvements.

The redevelopment of Watson Island and associated employment opportunities, and 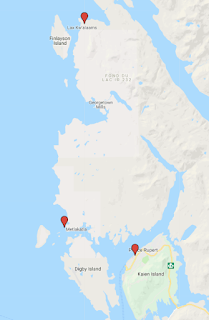 For Lax Kw'alaams Mayor John Helin, the new agreement shows how the three communities will work together on areas of shared interest.

"I think the MOU which we recently signed is a step forward and signifies the intention of the three communities to work together on the issues that we have in common.

We have a large number of our members that reside in Prince Rupert and any way that we can improve the lives of our members, people in the city and the region benefits all of us."

Mr. Helin also shared some exciting news when it comes to housing for the region, making note of a current initiative underway to help address the housing issues found in the city.

"A fine example of that is a 60 unit housing complex that we are going to build in Prince Rupert and we are working closely with the City to identify a place that would suit this development,”

The location for that sixty unit housing development has yet to be selected and no timeline as to when the construction may get underway was shared as part of today's announcement.

Metlakatla's Chief Councillor Harold Leighton made note of the how the agreement will strive towards creating a healthy community and build relationships.

“The Metlakatla First Nation prides itself on having a strong relationship with our neighbours while ensuring that our Aboriginal Rights and Title are acknowledged and respected.

This agreement not only works to create a healthy community and economy for those living in the territory we have called home for thousands of years, but further integrates Tsimshian culture into future planning as the region grows.

We believe that working together is the best way to achieve success and look forward to continuing to work the Lax Kw’alaams and the City of Prince Rupert in the years ahead.”

As for Prince Rupert Mayor Brain, the Memo of Understanding marks a good starting point on work towards key priorities in the region.

“Although our communities have always worked together, it’s a step forward for us to formalize our relationship and commit to shared goals. As our region develops over the next decade, we believe this list of shared interests will only grow, and that these key priorities are an excellent place to start.”

The Mayor shared the announcement as well as a photo of the signing ceremony through his Facebook page.

As part of their Memorandum of Agreement, the three communities have agreed to meet on a regular basis to continue their dialogue, though no timetable for those discussions were released through today's announcement.

You can review more on today's announcement from the City of Prince Rupert website.

A look at notes from Lax Kw'alaams and Metlakatla can be explored below: