B.C. Government gives from one hand, while it takes back with the other, that as it suspends Rural Dividend Fund

A program that will be providing some financial assistance to the province's forestry workers appears to be based on a bit of financial sleight of hand, with a 69 Million dollar fund announced last week to be financed by way of a suspension of the Rural Dividend Fund.

The latter a fund that communities like Prince Rupert use often to access available financial resources towards any number of projects.

As we outlined last week, the 69 million dollar allocation included funding towards early retirement bridging for older forest workers and new short term employment program on fire prevention and community resilience projects. Skills training and grants for training were also part of the overall roll out of the program on September 17th.

However, not mentioned publicly at the time of the Forestry support announcement, was that in order to collect that 69 million dollars, the Rural Dividend Fund would be shut down for the foreseeable future.

Something which now places the fund that communities like Prince Rupert use often to access available financial resources towards community projects unavailable and perhaps leaving a number of outstanding projects in a state of limbo.

In a form letter to applicants for the Rural Dividend Fund, Minister Doug Donaldson shared theprovincial government's plan of approach towards the funding program, the key element a one paragraph passage that brings the bad news for many communities.

"Funding this essential programming for impacted workers has required that we temporarily reallocate funding in the Rural Dividend Program. As a result all applications received in this fiscal year's intake period June 15-August 15, 2019, are suspended until further notice in order to support workers and communities in the Interior as they face an unprecedented situation in the forestry sector economy. Applications submitted in the 2019 intake period will be retained for vetting and funding consideration at a future date"

Word of the provincial plan only came to light this week, when the Minister's letter was revealed by way of Twitter, which was then quickly picked up by some of the province's lead columnists and reporters.

Prince Rupert like many communities, regularly put in submissions for funding from the program and may have to revise any plans that civic officials have for the short term until the funding freeze is over.

One example of a project that is partially funded through the Rural Dividend program is the Redesign Rupert initiative, which the Mayor noted  in August makes use of some of that kind of funding.

Another that made use of the fund in the past was the Workforce Attraction and Retention Project that was put out for tender in the Spring.

The Funding announcements usually come with a splashy missive from Ministers and hailed by local MLA's highlighting how they are spending the Fund in each constituency, the most recent mass announcement came in May.

That was followed by the invitation to submit applications for the new application period. 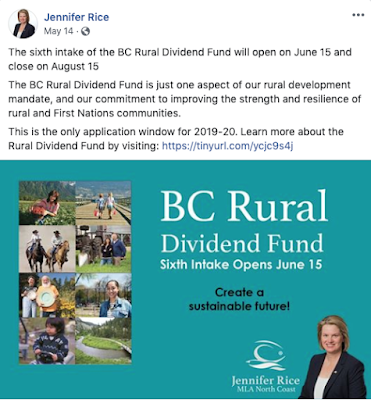 Existing funding for such programs should be safe, but any funding that was submitted by the City of Prince Rupert as of June 15th will now be on hold.

So far, the members of City Council have not indicated how much of an impact that the funding freeze from the Rural Dividend Fund may have on any current applications or their plans for this community moving forward.

The Sixth Rural Dividend Intake period closed in August and as the government noted at the time, it was the only application window available for 2019-20.

When the province is handing out the cash, the provincial PR machine does seem to go into full speed to spread the word.

However, when the money is being taken away, it appears that the flow of information from Victoria is a little less public, absent as it is from the Facebook pages and twitter feeds from our MLA's.

The funding freeze might make for some interesting discussions between municipal and provincial officials at this weeks UBCM gathering, as community after community asks why they have to bear the brunt of the province's latest financial blueprint of now you see it, now you don't.

For more notes on some of the past funding programs for the City of Prince Rupert see our archive page here.