"We need to get an agreement in place that will stand the test of time": John Horgan speaks to the work ahead for the Northwest Benefit Alliance initiative 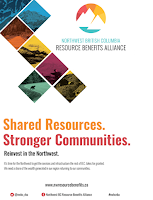 There's still no blue print forward to show just yet, let alone a funding announcement to wave in the air.

But, the Northwest delegates to the UBCM convention on Friday at least could say that their hopes and desires on a larger share of revenues on regional resources are still on the table for discussion.

The theme of the work of the Northwest Regional Benefits Alliance made for some of the closing minutes for Premier John Horgan's  forty minute or so address to the delegates that brought down the curtain on the convention, with the Premier indicating that work will continue from the groundwork put down so far when it comes to the long sought after revenue sharing initiative.

The notes of interest for the Northwest communities, came towards the final moments of the Premier's Friday address, where he recounted the 100,000 dollars in recent funding to help the member communities develop the foundation for their plans.

And while he had no similar announcement for UBCM, the Premier did note that the representatives of the Association and the Provincial government have been working towards moving the initiative forward. 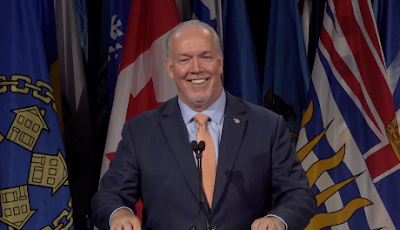 "This week week we re-committed to ensure that the Regional Benefit Alliance work that has been done by governments right across the north and by officials in Victoria is a reality in the years ahead.

We need to get a  agreement in place that will stand the test of time, read that means when a government changes.

We will be ensuring that resources that are created in a community to the best of our ability stay in that community. So that everyone benefits from that work, not just a few"

One does hope that the Finance Minister's geography skills will be stronger than the Premier's seem to be, should the time ever come to cut a cheque for the City of Prince Rupert.

During his address the Premier seemingly placed Prince Rupert Mayor Lee Brain a bit further east than he may normally be found; that through shout outs for the work of the Resource Benefit trio of Shane Brienen, Sean Bujtas and Lee Brain from Houston, Terrace and Prince George?

Hopefully, Prince Rupert's CFO Corinne Bomben will make sure that the Province has the right account transit numbers when it gets a little closer to the time for  the bank transfer.

Mr. Horgan's geography flub may also be a sign that both the Mayor and North Coast MLA Jennifer Rice need to raise the city's profile a bit in Victoria.

And while the Premier was indicating his desire to forge that new agreement with the Northwest Benefits Alliance membership, some of the more prominent notes from the week of convention might suggest that the project may be a bit more of a long term prospect than local officials may like.

During the convention it was revealed that part of the Provincial Government's forest community rescue plan would involve cannibalizing the popular Rural Development Fund, which has been put into curtailment for now as the Premier put it.

And while he promised that the popular and widely used Dividend Fund would return next year, there was no timeline offered up by the Provincial government towards when the funding taps will be turned on again.

The news of the hold on funding, one  that left the convention's municipal delegates with the visual image of actually departing Vancouver with less money to use for local initiatives, than they may have had heading into the gathering.

Also getting some attention during convention week, was an instruction by Finance Minister James to all cabinet ministers to start to reign in their discretionary spending.

That as Ms. James  begins to put together the blue print for the NDP governments next budget in February, a document that seems destined to be framed in shifting economic times and with some of the province's key resources and exports feeling the pressure.

All of which might suggest that it could be a bit of time yet, before the Northwest representatives of the Resource Benefits Alliance find some financial success towards their goal of a larger share of the money from the resources of the region.

You can learn more about the Northwest BC Benefits Alliance and their work from their website and facebook page.


Saturday through his Facebook portal, the Mayor of Prince George, er Prince Rupert offered up a short overview of his time at UBCM and recap of the Premier's address to the convention, highlighting some of his "takeaways" on the RBA discussions in Vancouver. 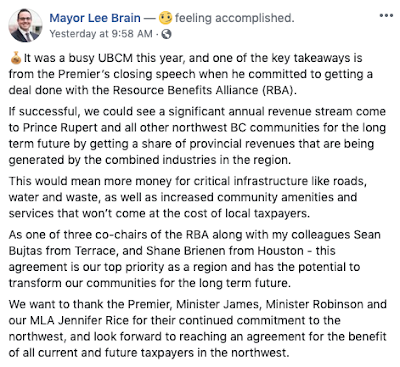 Further background on Northwest Resource Benefits initiative can be explored from our archive page here.

For more items of interest on City Council themes see our Council Discussion archive.
Posted by . at 9:36 AM

Email ThisBlogThis!Share to TwitterShare to FacebookShare to Pinterest
Labels: NW Resource Benefits Association and the Province