Not many people can claim that "they shut the place down"

As they were planning to host the Harley Riders and their friends on Saturday night, the ownership of the Seal Cove Neighbourhood Pub was also announcing their plans to close the east side gathering place after the weekend party.

A post to the Pub's Facebook page  revealed the fate of the pub which had come back to life two years ago, that after a lengthy hiatus for much of the last two decades. 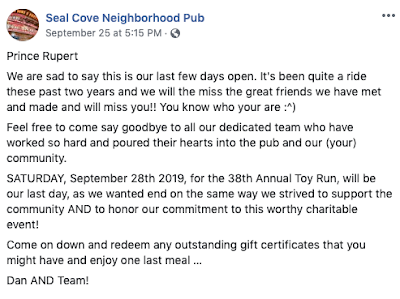 The reborn east side dining and beverage house had a one year gestation period, first purchased in the fall of 2016  wth renovations to follow and the officially reopened on October 17th, 2017 .

With the new team on the east side looking to tap into Community spirit by hosting a number of community events to give back to Prince Rupert.

The Seal Cove Pub had also looked to provide for one of the few live venue opportunities remaining for the city's music and comedy scene, hosting a number of bands and comedians during the last two years of its run.

The pub which was formerly known as Solly's was part of the halcyon  bar scene days for Prince Rupert's night life, with the location a favoured destination for many in the late 1980's.

However, as the city's population began its significant exit in the nineties and attitudes changed towards where Rupertites chose to socialize, the east side became a bit of an off the map location for most.

That was something that the new ownership had hoped to reverse through a number of projects, but with Saturday's last call, that now will be a challenge for someone else to take on perhaps. 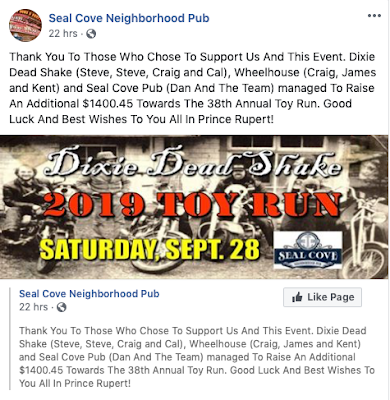 To their Credit, the management and staff at the Seal Cove Pub went out showcasing their community spirit, hosting the wrap up for the Harley Riders and their friends ... if you're going to call it a day, hosting as big a bash as you can throw seems to be the right way to bid farewell.

With the doors closing to the east side Pub, the city's pub scene now is a downtown and Cow Bay focused one, with all of the community's social options found in those to areas of the city.

For more items of note on the City's Business sector see our archive page here.