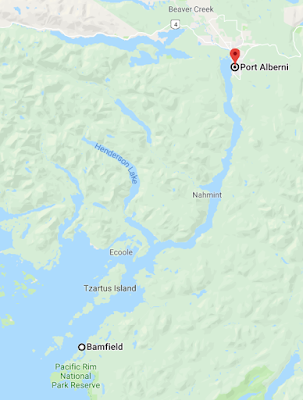 Friday night's bus tragedy on Vancouver Island once again called out attention to the fragility of life and offered another unwanted  reminder of the worries and concerns for parents who watch their youngsters head off to new great adventures with hope; all while striving to banish their worst fears as far in the back of their minds as possible.

This weekend, the worst fears took precedence as two students on a University of Victoria field trip to the Bamfield Research Centre on the West cost of Vancouver Island lost their lives in a horrific bus incident.

And much as it was when Canadians heard of the Humboldt hockey team bus crash of 2018 and many such incidents of the past, we again are reminded that there is much more that we should do towards ensuring that every possible safety measure is considered when it comes to road travel.

For sure there are still many questions to be answered towards the Friday night accident which claimed the two lives.

Why the bus was travelling as late as it was, what impact some horrendous weather may have had in the accident and what the condition was on the night in question for what might barely be considered a road.

Those questions will no doubt make for the Coroner's Report that will come following the investigation into the Friday incident on the road to Bamfield.

On that final question though, in what is a must read piece of journalism and something that should be shared as far and as wide as possible, Vancouver Sun columnist Vaughn Palmer has catalogued the concerns over such roads that has now spanned three governments from the Liberals days of Gordon Campbell and Christy Clark to the current one now led by John Horgan's NDP.

Three governments which have all had a chance to move forward on the need to ensure that roads such as the one to Bamfield are much safer and all of which have failed to address what should have been done long ago.

The three opening paragraphs of the column provide the foreshadowing of twelve years ago that tragically was brought to the province on Friday night, leaving two students dead, their families grieving and a province trying to comprehend the incomprehensible.

Palmer's review of the long running quest for proper maintenance of these forest roads that are more likely to be used by tourists now rather than forest companies, reads like a review of government at its worst.

Where studies and reviews are produced and promptly put away for someone else to deal with.

One of the Sun's most read columnists, Palmer cites a 2008 report by the BC ombudsman that raised the issue of the growing risks on those roads.

A report promptly ignored by the Liberal government of the day.

Two other proposals for action were launched by the Christy Clark government and they too somehow fell to the side of the action list, lost in some form of Legislature limbo.

The current government of John Horgan has been seeking what Palmer described as "perspectives" from communities, industries and First Nations on the planning, use and maintenance of such roads.

Something that seems to serve the never ending theme of creating more studies on an issue that clearly has been studied enough and still providing for even less in what should be tangible action.

Considering the long sought after improvements called for by the Huu-ay-aht First Nation for the road to Bamfiled, the inability of government to act is an indication that our elected representatives, regardless of party affiliation, have selective hearing when it comes for how they prioritize what are obviously issues that need to be addressed.

Mr. Palmer's final line stands as the declarative statement that action is long overdue and an indictment of governments past and present.

The Liberals did ignore it. But in light of Friday’s tragedy, the New Democrats can scarcely do the same.

The article (which you can explore here) should be required reading for each and every one of the 87 MLA's that currently serve in the Legislature , followed by a vow from each to address the issue in every community that is served by these forms of roads.

Nothing will be sufficient to provide comfort for the two families that now have to carry on with their lives without their loved ones and all we can really do for them is to offer our sympathies and make a vow to not let Friday night's horror fade from view.

For the government however, the call is now loud that the situation currently in place in communities across the province and long noted as dangerous for over a decade can't be put aside any longer and that it is time for government to make safety one of its top priorities.

Email ThisBlogThis!Share to TwitterShare to FacebookShare to Pinterest
Labels: legislation all stalled over 12 years, On issue of Forest roads, Reports