The weather was great and the cause was greater, with a large number of Rupertities taking to the routes of the Terry Fox Run under sunny skies on Sunday afternoon.

Participants took to the streets of the city at 1PM and worked their way along a charted path that carried them along George Hills Way and on to points east.


Two  routes made for the Prince Rupert event which started and finished at Northern Savings, there was  a 3 km, walking or short run route and a longer 7.2 km path to Seal Cove and back.

Runners and their supporters gathered at the finish line at Northern Savings Credit Union, where there was a post run celebration taking place mid-afteroon.

With food, music and more part of the wrap up to another successful run in Prince Rupert.


In the days leading up to this years run, Run organizers at Northern Savings noted that it was another successful year of fundraising by Prince Rupert's Jim Terrion.

As has been his tradition through the years, Mr. Terrion returned to his North Coast hometown for a fifteen day blitz prior to this weekend, raising over $20,000 in that period of time.

Northern Savings was set to make note of Mr. Terrion's final totals for this year as part the today's wrap up celebration of Sunday afternoon.

The former Prince Rupert resident was back in Prince George today where he now lives and works, and he was hailed for his fundraising efforts by MLA Shirley Bond at the Prince George event this afternoon.

Once this years numbers are in, Mr. Terrion and his mother Faye will have raised close to $800,000 for the Terry Fox Foundation since they started their annual fundraising work in 1991. 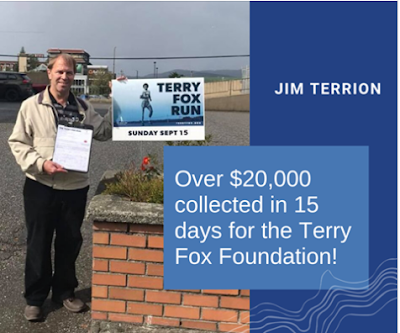 There is still an opportunity for you to donate to the Fund for this year, learn more from the Terry Fox Run website, with the local notes available here.

You will be able to get more background on today's Prince Rupert Run through the Northern Savings Facebook page created for this years Run.

For more Community Event items of note see our archive page here.
Posted by . at 3:36 PM