NDP, Conservatives remain ahead of the pack in Skeena Bulkley Valley 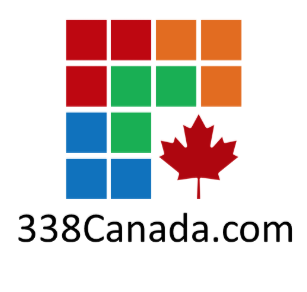 Some slight tweaking of the numbers from 338Canada this weekend, as the narrative for Skeena-Bulkley Valley follows much the same path that it has for the last month.

The weekly review of voter intentions in the Northwest once again has delivered just a smidgeon of change in the distance between current front runner Taylor Bachrach from the NDP and Claire Rattée of the Conservatives .

That does however,  indicate some forward movement for the Conservative who has shaved one percent off the NDP lead in the last seven days.

The news was less positive for the Liberal and Green candidates with both Dave Birdi and Mike Sawyer seeing drops in the declared support for their campaigns in the week just ended.

For Jody Craven of the People's Party of Canada, the week showed a bit of a slight bump in support, though he still remains in the low single digits.

He did however  fare better than Christian Heritage Party candidate Rod Taylor, who does not even register in the survey.

This week's results marked the first to be delivered following the dropping of the writ and the official start of the campaign that will lead to voting day on October 21st. 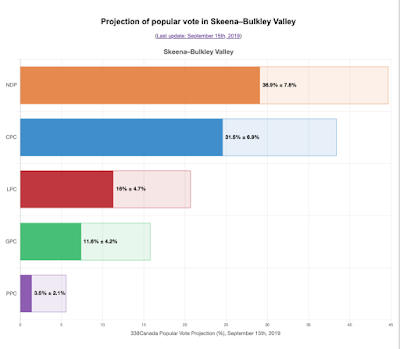 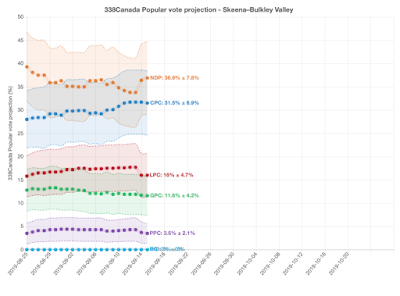 Provincially, the Bacharach lead is a sliver of good news for the NDP supporters in Northern BC, where the Smithers Mayor is currently the only NDP candidate to be leading in any of the four Northern ridings.

As the weekend numbers indicate, for the most part, a return of Tory Blue will make for the colour on the map for the remaining constituencies, should the intentions turn into votes. 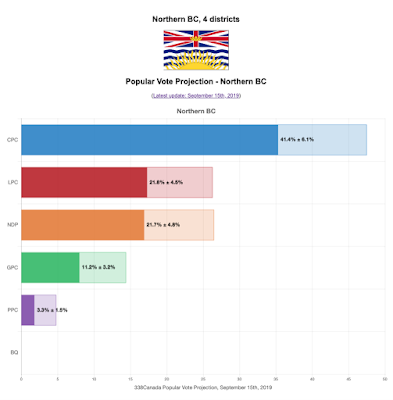 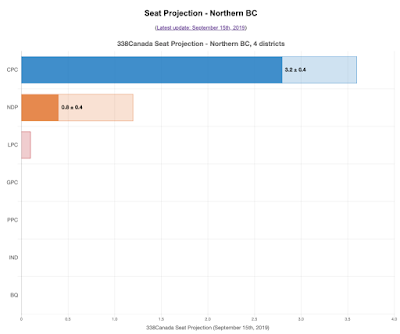 Nationally the trends appear to favour the Liberals to this point, as the campaign moves into full speed from here to October 21st.

With the Liberals finding success in likely and leaning ridings, leaving 67 considered a toss up.

The numbers however still indicate that if the vote count was to be held today, the Liberals would come up short when it comes to seats towards forming a majority government. 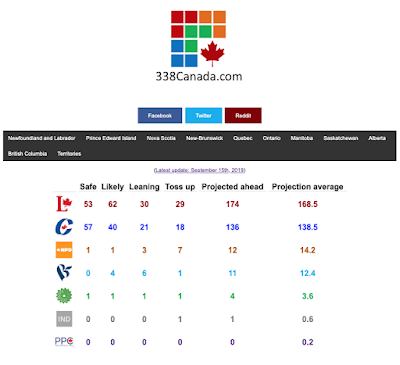 You can track all of the work of 338Canada here.

For more items of interest related to the campaigns across Skeena-Bulkley Valley see our archive page here.