It's been in place since the summer of 2018, but the mighty Pirate Ship at Prince Rupert's Mariner's Park has a flaw, a navigational flaw, that was noted on twitter today, with a maritime observer making note that the navigation lights on the ship are reversed on the landlocked vessel ...

A place where it appears that port meant starboard and starboard meant port for over a year, for those looking to navigate around the structure at the downtown park on First Avenue East. 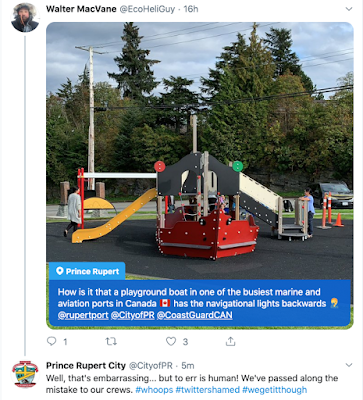 The City took the twitter advisory in good humour, promising to dispatch some of the city's Pirate mates to address the navigation concerns in short order.

Despite the navigational faux pas, the youngsters of Prince Rupert and area and those visiting the city, have had no problems navigating the ship, scrambling on from either port or starboard for over a year now.

For more items of interest related to the City of Prince Rupert see our archive page here.