Today will make for a busy day for Lieutenant Governor Janet Austin, who flew into Prince Rupert on Thursday night in anticipation of a two day visit to the city, before the Queen's representative in British Columbia heads off across Hecate Strait for some time on Haida Gwaii.

Also arriving in the city, though by sea is the HMCS Calgary which  will pull into Port this morning and will serve as the Lieutenant Governor's home away from home for much of her four days of travel away from Victoria.

The Lieutenant Governor was quick to Social media on Thursday as she and her travelling party hitched a ride with the Port of Prince Rupert to cross over from the Digby Island Airport. 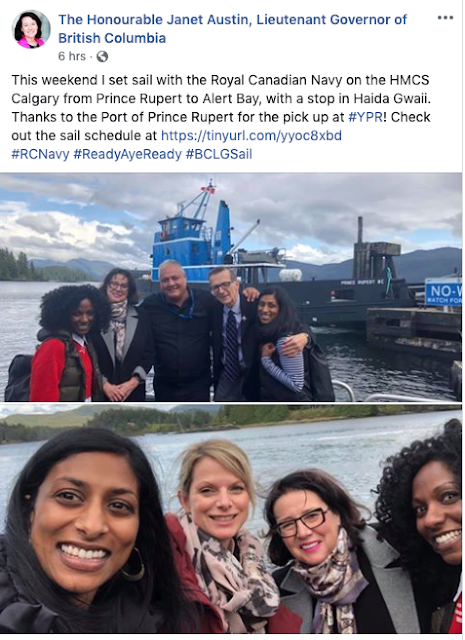 For the Prince Rupert portion of her journey she will be taking a tour of the Friendship Centre on Fraser Street where she will join in on a cooking demonstration at the new Community Kitchen as well as to visit the pre-school and meet with participants in the Aboriginal Infant Development program.

Also on the schedule for today, a luncheon meeting with Mayor Lee Brain and City Council at City Hall, as well as a tour of the Coastal Shellfish hatchery and facilities and an opportunity to sample the North Coast famous scallops prepared by Chef Fukasaku from the Fukasaku Restaurant in the Atlin Terminal.


Saturday the Lieutenant Governor and Commander Jonathan Kouwenberg, Commanding officer of the Canadian warship HMCS Calgary will host a tea reception on the flight deck of the Canadian Frigate as they welcome members of the community from Prince Rupert.

Sunday it's anchors aweigh as the Lieutenant Governor heads for Queen Charlotte on Haida Gwaii, where she will walk along the waterfront with Mayor Kris Olsen.  Also on the Sunday agenda for the Islands a stop at the Haida Heritage Centre and a luncheon reception for members of Queen Charlotte and across Haida Gwaii.

Tuesday the Calgary and their travelling party will arrive in Alert Bay for the final day of the Lieutenant Governor's tour of the northern regions of the province.

You can explore the details for the tour here.

As well, to keep up with some of the events over the next four days, follow the Lieutenant Governor's Facebook Page and twitter feed to see what she's been up to and who she's met.