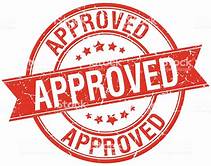 In a Special session last evening that went on a little longer than many might have been expected, Prince Rupert City Council approved the passage of their Five year Financial Plan along with the two percent property tax reduction proposed by Council for 2019.

The evening put the final stamp on the details of the Five Year Financial plan elements and the bylaw putting in place the two percent property tax decrease for 2019.

As well on Thursday, Council put in place the creation of a reserve fund for the recently delivered 8.1 million dollars in capital and infrastructure funding from the provincial government.

All of which can be explored from the Agenda Package that Councillors reviewed on Thursday which is found below.

The process of quick approval slowed down a bit during the near twenty minutes of Council work, when Councillor Gurvinder Randhawa once again tried to convince his fellow councillors to reduce their salary prospects.

With the second term councillor looking once again to sever the compensation to that of the Mayor's salary which calls for Councillors to receive 25 percent of the Mayors 75,000 per year salary. As well Mr. Randhawa sought to hold Council to just the replacement of the lost tax exemption from the change to the Revenue Canada regulations. 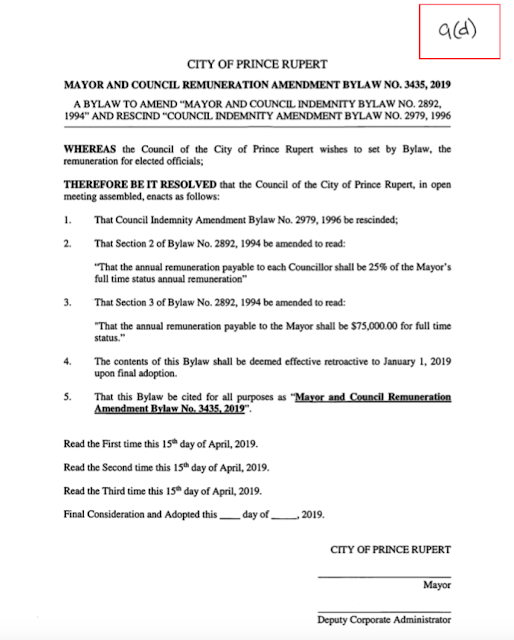 As it was in the April 15th session, the majority of the Councillors disagreed with Councillor Randhawa's attempted amendment, though the length of the debate and nature of the council commentary was scaled back from that of the previous sessions that explored the city's budget and salary proposals.

"It's not that much, I think we're getting maybe another 1,000 dollars more, give or take a few cents if you factor in that 25 percent and I believe the Mayor, when you factor in that is making only a couple of thousand more, maybe three max, so when you look at those figures those aren't big raises ... I think if you look at any wage structure in this town, there's a lot of people making a lot more than $75,000 that are working at jobs, there's a lot of people in town not making that much too, but hopefully over the next few years those wages will increase " -- Councillor Barry Cunningham

"The reality of this is you know, that there was a Blue Ribbon committee formed, I mean,  I don't know how many times I have to say that, they were the ones that looked all aspects of this and they are the ones who looked at these numbers. You seem to be concerned about having a couple thousand dollars and you're trying to say that it's going to be a tax increase for our residents next year, well it's not going to be a tax increase. What it's gong to be is next year we're hoping that more money comes in and Alta Gas is paying more taxes, when Pembina is paying more in leases. I only hope that next year we can do a tax decrease and not even be concerned about what this is going to do for us next year ... I feel that the numbers are fine, I have no issue with it, this Committee was formed and they've come up with these numbers" -- Councillor Wade Niesh

In addition to the salary observations, Councillor Cunningham delivered one more tribute to the work of Mr. Brain over the last four years and noted how he has always been in support of the Mayoralty as a full time positions,

"I've said this before, and I'll say it one more time I think the benefits of having a full time Mayor in this town far outweigh anything else. I've seen it over and over again in meetings, I seen it in results with Watson Island and a few other places. We have a person who's there all the time to negotiate with whoever it is and that's just the way life is nowadays, if you don't have someone competent there to deal with these people, you're either not going to have them come to your town and investing the money and creating jobs, or their going to go someplace else, and so far the track record for this town, our staff and this council is pretty good ... I've supported a full time mayor since I got on this council and I still support a full time mayor,  you have to pay a full time mayor. If you want young energetic, vibrant, far reaching people to run something you've got to pay them the money"

As the conversation continued most council members were in agreement with Mr. Cunningham that the Mayor's position and salary status should be that of a full time Mayor and now fixed at the 75,000 per year level.

However,  no one took the time to point out that as Mayor, Mr. Brain also has the opportunity to add to his compensation levels through membership with the North Coast Regional District and other board duties.

Last year, that membership added close to 13,000 dollars to his compensation level above that of his salary from Prince Rupert.

When it came to the final word on the councillor salaries, Councillor Nick Adey sought some clarification from the Chief Financial Officer on the nature of the pay raises if all they did was to make up for the lost tax exemption.

The mayor observed that the difference would between 16,000 to 18,000 for council members, with the City's Financial officer noting that would be a 15 percent increase.

When it came time to vote on the issue, Mr. Adey also sided somewhat with Mr. Randhawa's council salary themes, voting against the motion as outlined in the bylaw, but reinforcing for Council that he did believe a salary increase was warranted.

"It's a bit of a dilemma because I took a position when I made the amendment on Monday that it would be a more moderate increase and so on the basis of that, I would be opposed to the motion but I would like to make it clear that I'm in favour of an increase ... that's where I'm at"

Council members also didn't have much to say when it came to Mr. Randhawa's  observation that the process should have taken place as part of the election agenda prior to the election of 2018.

"When we released our election agenda at that time if we tell people Ok if I get elected I would get like a ten or twenty dollar raise or this much raise because my qualification is there ... I don't think anyone should have any problem then, but after an election ... I don't think we are fair with the community then"

And that really is one of the main issues related to the way Council approached their delivery of compensation and the return of the Mayor to Full Time Status.

Had they allowed for a timeline of consideration prior to the Municipal vote of 2018, the Council could have fully consulted its residents on the compensation deemed appropriate for their work and whether the community as a whole believes that the Mayor's position should be full or part time with the requisite compensation that is required.

That way, those seeking office would have been running for their positions with a full understanding of what they could reasonably expect to earn at the job and in the case of the Mayor's position whether full or part time fit into their vision of the job.

Instead as it was rolled out, the Council has set their own salaries by way of recommendation of the Select Committee panel, well after they've taken office, which seems somewhat of a back door approach to full consultation and transparency with those who in the end will have to pay for the salary structure now in place.

Back in March, we touched on the themes and recommendations now part of the Bylaw from the Blue Ribbon Select Panel Committee along with the first of what became a six week long period of festivus like declarations that came from some of the council members as the debate carried through until last night's final approval.

On Thursday, Councillor Wade Niesh made note that as council approves salary increases, they can also decide to scale them back should the situation warrant.

"Any Council can choose, we could next year we could decide to give ourselves a fifty percent decrease if we want, just because we make a bylaw today, does not mean that the bylaw can't be changed, anytime you want to update a bylaw, you update a bylaw ... if in four years Lee decides not to run and somebody else decides they come in to be the mayor and council in that day decides that they want to give him a part time job and cut his wages back then they can do they have that option"

Those are observations which will have residents keeping a watchful eye as to whether all of the industrial development and additional revenue streams that Council believe are on the way, will actually arrive; allowing for the continuation of one of the more generous compensation packages to be found in the Northwest and much of the province.

With the passage of the bylaws, the discussion period for Council will come to an end, though if some of the commentary found through social media over the last few weeks is any indication, the process that council put in place and their final decisions on salaries may make for a theme of discussion for a longer period.

So far the City has not posted the video presentation of their Special Session of Thursday, should they add it to the inventory, you will be able to find it here.

You can review the process that the City Council made use of towards deciding on their final compensation levels below:

January 30 -- As Mayor reverts back to previous salary status; City's Council pay issues to be reviewed as part of budget process

For more items of note on the Budget and salary discussions see our Council Discussion archive page available here.

To return to the most recent blog posting of the day, click here.
Posted by . at 11:51 AM