It was announced as one of the major Highway 16 improvements to come for the Northwest back in 2015; but nearly four years later there's little to show in the way of progress for the Mile 28 Highway 16 overpass project.

The major investment in Northwest road infrastructure was introduced by then Liberal Minister of Transportation Todd Stone, who hailed the 37 million dollar infrastructure project as one that would reduce the bottleneck of the level rail crossing, which has seen more and more delays for motorists, that as the frequency and length of CN Rail trains to and from the Port of Prince Rupert increase their transit along the northern mainline.

The work is designed to remove the last level rail and road crossing on Highway 16 in the province.

However, since the change of government in Victoria of two years ago, less and less has been heard about the ambitious road reconstruction plan for the Northwest. 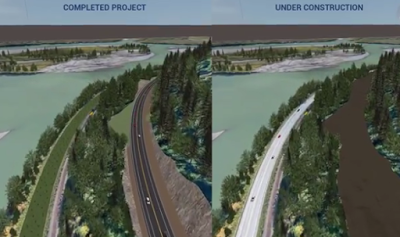 The most recent reports out of the Highways department have listed a number of upcoming highway remediation projects along Highway 16 from the Bulkley Valley through to Haida Gwaii.

Included on the list is some extensive bridge and road work for Haida Gwaii at Port Clements and Tlell, as well as the start of the changeover over for the intersection of Highway 16 and 37 in Terrace/Thornhill.

That project will see the Ministry put a round about in place at that intersection, removing the four way stop that currently controls the flow of traffic through the area.

Most recently in Prince Rupert, the Ministry of Highways began to tackle its to do list of safety enhancements for McBride, Second Avenue West and Park Avenue.  The Ministry has also said it is considering a roundabout for the city, looking at the intersection of McBride and Second Avenue West as the best place for the traffic flow control project.

As for the Mile 28 Overpass, the Ministry is reported to still be considering their plans, with few details available as to the status of the review or that of the project.

Some background on the long delayed start to the Highway plans can be found below:

For more items of note related to Transportation along the Highway 16 corridor see our archive page here.

More notes on the Ministry of Transportation can be reviewed from our Legislature archive.

To return to the most recent blog posting of the day, click here.
Posted by . at 10:10 AM

Email ThisBlogThis!Share to TwitterShare to FacebookShare to Pinterest
Labels: Little to show yet for major highway project in the NW