With more votes than in 2013 and a very strong organization that got that vote out, the NDP held their ground on the North Coast, returning incumbent MLA Jennifer Rice to office in a wild night in British Columbia politics.

While the results in other ridings may require the opening of the absentee ballot boxes or go to  a judicial recount, there will be no need for such dramatics here, Ms. Rice was off to an early lead and never really faced any danger as polling station after polling station delivered their results.

Such were the early, early indications from the North Coast, that Global BC had declared her the winner of the riding very early on in their broadcast, basing their decision on the results from but two polling stations.

And while that no doubt may have raised a few eyebrows at the time, as the night played out the number proved the prognostication correct.

The only glimmer of a Liberal push back came about an hour into the vote count when Herb Pond managed to see a significant jump in his early totals, one quickly brushed back as more results came in with Ms. Rice returning to a near 20 percent lead at times, a spot she held for a good portion of Tuesday night.

For much of the evening, the incumbent was in a comfortable lead, the prospect of any massive surge away from the NDP to the Liberals, a concept that was quickly dashed as the vote counting continued on into the night.

The final numbers found the NDP message delivered, and on the North Coast John Horgan's talking points were the main focus for the contest for the party, with Ms. Rice the messenger who was rewarded with the loyalty of a strong NDP vote providing a 24 per cent cushion when Elections BC recorded the final notes from the 47th of the 47 ballot boxes.

With 8,686 total votes on the night, Ms. Rice improved on her results from four years ago, while Liberal candidate Herb Pond saw only a slight uptick from the numbers of 2013.

And while the Greens were surging in other areas and claimed three seats on the night on Vancouver Island, on the North Coast they actually found their vote totals decline by twenty two votes from four years ago.

The final count will shift slightly as absentee ballots are added to the mix in the weeks to come, though those numbers will have no impact on the local dynamic, with Ms. Rice firmly holding the North Coast as a strong NDP enclave.

From those final numbers however, the trend of low voter participation will continue to be something that raises questions about political engagement. With as many potential voters taking a pass on election day once again, as those that took their democratic rights to heart and cast a ballot.

The 8,686 North Coast residents that made the trip to a polling station made for a slight increase in voter participation, with 546 more votes cast in the riding than in 2013.

However,  a significant number of the 14,220 registered voters (as of April 11th) of the North Coast still appear to be somewhat detached from the electoral process, something that anyone looking to retake the riding from the NDP needs to address.

Tuesday it was the familiar voting patterns of the past and the work on the ground by her party workers that once again took Jennifer Rice to victory.

And it was very much a result that came from her own efforts, Ms. Rice's success at the polling booth came without one visit to the riding by NDP leader John Horgan, who seemingly had no fears of seeing the North Coast shift its allegiance when the final numbers rolled out.

Elections BC won't be releasing the final vote count totals and the breakdown of the ballot box by ballot box count until later this month, but those numbers will make for an interesting review.

Once tallies are released, most likely the map will be coloured much as it has in the past, with the NDP very strong on the Central Coast and Haida Gwaii, the Liberals strength again found largely in the urban area of Prince Rupert, but even here, the large patches of Orange will show the strength of the NDP brand on the North Coast.

For the returning MLA the future is still somewhat unclear, will we have a government representative or one again in opposition?

The razor thin margin between Christy Clark's Liberals and John Horgan's NDP makes the upcoming recounts in the closest of races a process that promises to add just a bit more drama to a remarkable election night.

Where the Greens decide to align their support may also make for a telling narrative, should Ms. Clark not boost her seat count to majority status in the weeks to come. 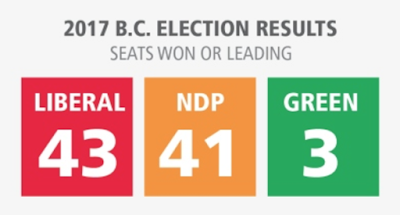 The 2017 campaign results may even leave the province's voters on standby, should the final numbers following the recounts not deliver a majority, British Columbia may see a minority government for the first time since 1952.

While there is some talk of a potential coalition government for the Greens with the Liberals or NDP perhaps becoming the new narrative, so far the political pundits are leaning more towards the prospect of a minority government. A political shift that would leave the Green Party as free agents to a fashion, ready to offer, or remove support as individual policies or initiatives are presented.

Minority governments for the most part are turbulent things, given to relatively short life-spans, the prospect of heading back to the polls before the traditional four year mandate could very well be the next chapter for the evolving political thriller from Victoria.

For the shorter term, the issues on the North Coast remain much the same today as they did when the writ was dropped, too many residents still don't have well paying jobs, far too many families have seen children move away owing to the lack of opportunities. The housing situation still needs to be addressed, themes on medical care, transportation and education remain key areas of concern for many.

The need for a strong advocate for all in the riding should still be the over riding focus for Ms. Rice. Her first four years provided for mixed results in that advocacy, she was late to the call for some issues in that period and will need to sharpen her elbows to make sure that the concerns of the North Coast gain more notice, regardless of which party in the end forms the new government.

During the course of the five weeks of campaigning, the NDP incumbent frequently noted that she believed that she had been a strong representative for the region at the Legislature

Ms. Rice has seen that belief endorsed by a significant number of voters and been rewarded for her efforts with numbers larger than four years ago. By any measure, the NDP message here and her dedication towards it has resonated for many, those positions clearly finding favour  by the majority of those who marked their ballots.

The returning MLA's task ahead is to take to her duties with strong engagement, reflecting not only the policies and beliefs of her party, but to also listen to all of her constituents and to take the concerns of the many communities that she represents back to Victoria.

As she, like all of us, waits to see how the political landscape settles in the weeks to come, Ms. Rice can begin to prepare her own Legislative blue print, ensuring that even in a riding as far from the Legislature as the North Coast is, that our many challenges are acted upon and our issues and concerns are heard loudly and frequently.

We've been collecting notes from the provincial campaign over at our political portal D'Arcy McGee, you can review last night's items there.

As the day moves along we'll also be updating our North Coast votes archive page as well, tracking the developments from the Northwest.