During the wrap up to Monday's City Council Session, Councillor Blair Mirau served notice on Council of his intent to introduce the topic of Council's Closed to the public sessions and review some of the process involved when the City decides to go behind the  closed doors.

So far this year, City Council has scheduled and participated in eight of the Closed Sessions to this point which have excluded the public, that follows a strong year for Closed meetings of 2016, where Council shut the doors to the public 18 times.

Mr. Mirau noted for Council on Monday, that he has received some inquiries from residents regarding the volume of those closed sessions, something which he noted they rightfully have questions about that.

As part of the introduction for his notice for discussion, he offered up some sympathy for Council's dilemma on the issue of when to call a closed session, citing his new found appreciation over the last couple of years when it comes to such areas of note as the legal issues with Watson Island and negotiations with proponents of Major Projects particularly those of Liquefied Natural Gas proposals.

Offering up the upcoming meeting as an opportunity for Council to discuss a range of bullet points on best practices to the closed meeting process and how Council should approach the issue.

"I want to be proactive in putting forward a motion that basically takes the recommendations from the ombudsperson on Best practices for closed meetings and communications. So there's ten bullet points - and I'll spare you guys reading all of them tonight - ten recommendations from the ombudsperson, six of which we are already doing, the other four are basically building on doing a  little bit more than kind of the legislated minimum. I think it's in our best interests, but also the public's that we are proactive in this, and I look forward to discussing that at the next meeting" -- Councillor Blair Mirau introducing his notice to Council to put the topic of Closed Council sessions on the agenda for the next Council Session 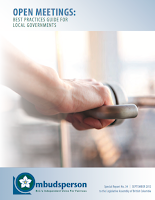 In a note of some irony, with Councillor Mirau's thoughts on closed sessions still fresh in their ears, on Friday Council issued notice for yet another closed session for May 16th.

For those looking for a little background on the topic, the Office of the Ombudsmen has a report on Best Practices for Local Governments posted to the agency website.

If Mr. Mirau is looking to expand on the scope of his review of Council's process when it comes to meetings, he may wish to get the thoughts of his fellow Council members on some other noticeable themes of this year.

Included on that list could be a review of the out right cancellation of two of the scheduled Council sessions so far this year with little in the way of explanation, and what appears to be a growing focus on workshops and discussions with third parties outside of the public council sessions.

The most recent example of those themes was actually outlined by Mayor Brain on Monday evening, when he observed for Council the nature of a new policy booklet for environmental issues, a document which was designed by a group associated with his Select Standing Committee on Sustainable City initiatives.

Those findings will be presented to Council to explore further in a closed workshop environment, before the Mayor plans to take a larger overview to the public.

Another recent move by Council, that of the remake of the Prince Rupert Airport Board likewise seems to have been determined outside of the public council meeting process, with no discussions taking place in Council prior to the announcement and little in the way of council discussion since.

Council members may want to outline for the public the value of that behind the scenes process, which seems to be a growing approach by this Council when it comes to developing policy and making decisions,.

Councillor Mirau's proposed exchange of ideas might make for a good opportunity to explore those themes as well.

Hopefully, when his notice comes up for discussion at the May 23rd Council session, those around the council chamber will be as inclined towards as much conversation on his project, as they were this week on a range of other themes.

On Monday night, Council members allocated forty minutes to a review of their short and long range goals for environmental issues and emission controls, while another seventeen minutes was dedicated towards whether they wished to be involved in a Northwest plan to recruit workers to the region.

As well, Council engaged in a fairly lengthy and enthusiastic exchange reviewing the long rage road  development plans for the community, some of which may or may not ever be developed.

Considering the importance for better engagement with the public, the Mayor and Council members surely will provide for just as much time to discuss the issue of closed meetings, as well as other themes related to Council transparency and accountability.

You can review some of the background to Councillor Mirau's notice to Council from the our City Council Timeline for Monday here.

As, well his talking points can be explored further through the City's Video Archive starting at the one  hour, thirty three minute point.

** Note: the above article was udpated to reflect that there were actually eight closed sessions this year, two more than originally noted six from the article previous.