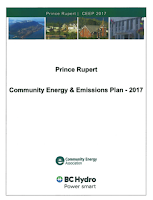 Prince Rupert City Council reviewed some of their short and long term plans towards their approach on environmental issues on Monday evening, with the City's Manager of Community Development providing an update on the City of Prince Rupert Community Energy and Emissions plan.

Hans Seidemann opened what eventually became a forty minute exchange with Council members, starting his presentation by reviewing some of the past targets that Council had set previously in the bid to reduce green house gas emissions.

He observed that some of those ambitions have been held back owing to a number of factors including lack of third party support, reduced opportunities to take part in incentive programs and lack of energy efficiency advisers in the region.

As part of his review, he noted that the new Update would offer a five year phased approach to try and meet green house gas targets as developed through the City's Official Community Plan, with the city to take advantage and expand on the experience that has been gained on environmental issues in the last ten years.

He observed how that will allow Prince Rupert to review how other communities have approach the process of reducing emissions and establish priorities for staff to seek out new ways of reducing costs and meet targets.

Mr. Seidemann outlined how many of the elements of the Five Year action plan come from the City's Hays 2.0 plan, as well as some of the initiatives from Redesign Rupert.


Council members became quite engaged in the follow up conversation, offering up a range of potential ideas and asking if other areas of note were feasible.

Included in some of the concepts put forward by council members was the potential for generating power from the city's water supply lines from Shawatlan Lake, creation of a district energy system tied into the recreation centre, as well as the creation of bike lanes and an idling bylaw as some areas worthy of further examination.

Mayor Brain took advantage of the discussion to review some of the recent moves that have taken place related to the 2030 Sustainable City initiative, which he noted was a pillar of the Hays 2.0 plan.

Of note from his observations was the creation of a small group that comes out of the Mayor's Select Standing committee, with the Mayor joined by Ken Shaw from the college and Samantha Wagner from Kitkatla environmental having combined to create a small policy booklet similar to the planning for Major Projects initiative.

Those draft policies will be brought to Council for consideration at a day long workshop, where such themes as renewable energy, transportation and local food production will be explored. He then explained that the once Council has adopted it as a draft policy then the city would take it to the public for larger discussion.

Mayor Brain also noted for Council that as part of his duties as a member of the UBCM climate leadership council that he would be taking part in an upcoming conference in Vancouver. The mayor will be attending the Renewable Cities Conference in Mid may where members of the UBCM group will be reviewing a number of issues.

A more extensive overview of the council discussion from Monday can be found on our Council Timeline feature here.

You can review Mr. Seidemann's report to Council from Agenda Package for the May 8th session it can be found on page 63 .

The video presentation featuring the overview and contributions from Council members from Monday's Council session can be reviewed below, it starts at the twenty one minute mark.

More items related to City Council Discussions can be found on our Council Archive page.