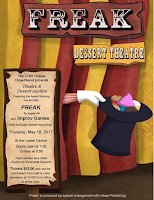 Having already won an award in Terrace at the Regional Drama Zones and taken to the Big Stage of Provincials in Vancouver, Drama students at Charles Hays Secondary are ready to offer up one more opportunity for Prince Rupert residents to take in their production of FREAK.

The play is FREAK the award winning one act play from Angela Hill that the Charles Hays group brings to life at 8:00 tomorrow evening on the Lester centre stage.

The CHSS troupe took the presentation to Vancouver in April for the Provincial showcase, where they also took in a number of workshops as part of the high profile provincial drama event.

Thursday's presentation is the latest production as part of the popular the CHSS Dessert Theatre concept, which serves as a fundraiser and celebration of the success of the CHSS drama department.

As well as the showcase event, the evening from the stage will also feature Improv games and a chance to sample some of the many creative desserts throughout the foyer that will be available as part of the evening. Those in attendance can also take part in the Silent Auction of the homemade desserts as part of the wrap up to the night.

Doors open at 7:30 with tickets selling for ten dollars, they are available from members of the cast and crew, at the Charles Hays Front office or at the door on show night.


The Charles Hays Secondary twitter feed, has a number of photos and videos posted that followed some of the CHSS drama department's travels through the year.

A review of other Community events can be found here.