The potential development of the McKay Street Park Project recently was in the news locally as Transition Prince Rupert launched it's Funding campaign. A North Coast initiative designed to raise money to bring the blue prints for the proposed redevelopment of the park to the active development stage.

Last week we noted some of those efforts with this item that outlined the progress for the remediation plan for the abandoned ball field which is located at the corner of McKay and Kootenay Avenue.

So far the Transition Prince Rupert  Go Fund Me page has seen $340 dollars donated towards the goal of 100,000 dollars.

And while that local fundraising campaign continues to look for support, this week the prospects for some financial assistance got a significant boost with word that the McKay Street Project has claimed a spot as a Top Ten Finalist in BCAA's Play Here competition for 2017.


The full overview of the McKay Street entry can be found here.

The nine other communities that Prince Rupert is in the running with include:

Prince Rupert Mayor Lee Brain took to his Facebook page to raise the flag for the project in Prince Rupert and call for votes from the North Coast and across Northern British Columbia to try and put the McKay Street Park Project over the top in the vote count. 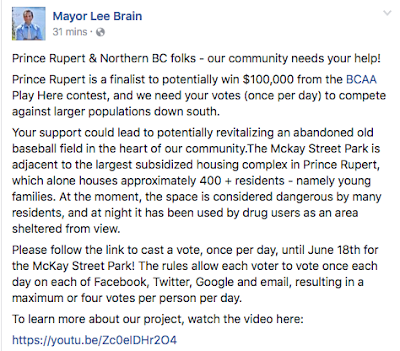 To go along with the Mayor's profile of the BCAA contest, Mayor Brain also has included the video that Transition Prince Rupert has submitted to the BCAA for consideration this year.

As noted in the Mayor's Facebook notes, participants can vote up to four different ways each day. You can find out more about how to vote from the BCAA Better Place to Play contest page here.

Voting continues until June 18th, the timeline of the voting process and more background to the competition can be found here.

More items related to North Coast Community Events can be found on our archive page here.