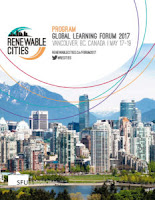 The environment, areas of renewable and efficient energy and themes of making our urban areas more sustainable will make for three days of discussion starting today in Vancouver as the 2017 Renewable Cities Vancouver Forum kicks off.

The gathering is bringing together a large cross section of municipal politicians, provincial officials and industry representative to Vancouver and representing the North Coast at that forum of learning will be Prince Rupert Mayor Lee Brain, who will be in attendance as part of his membership in the BC Mayors Climate Leadership Council.

The Mayor's trip to Vancouver comes following Prince Rupert City Council recently reviewed their approach to environmental targets and larger initiatives for the community, setting in motion an update towards the city's goals for the future.

During the course of that discussion last week,  Mayor Brain noted for Council that as part of his membership with the Climate Leadership Council he would be travelling to Vancouver for the large scale event, eager to explore a range of themes and hosts a number of seminars, speeches and work shops on environmental themes.

Sustainability issues have also been a frequent topic for the Mayor at Prince Rupert City Council, with the Mayor creating a 2030 Sustainable City plan, and leading a working group out of City Hall to work on those issues.

Those initiatives are one of the key elements of his Hays 2.0 plan from two years ago.

As he takes in the range of activities that are available for the delegates, a few of the themes that may be of interest for the Mayor through the event include:

You can review the full agenda for those in attendance at the Renewable Cities Forum from the 2017 Forum program here.

A short synopsis of the event taking place at the Four Seasons Hotel in downtown Vancouver is available here.

An example of the kind of information that the Mayor will be absorbing during his stay in the lower mainland can be found from the video below that was part of the 2015 Vancouver conference.

The first opportunity for the Mayor to share his findings from the Vancouver conference will come with the May 23rd Council session.

More notes related to topics from Prince Rupert City Council can be found on our Discussion Archive page.