It's not on the official program for the 2017 edition of Seafest, but the ever simmering irritant of the CN fence on the waterfront will clearly be part of the backdrop to this years events.

The controversial fence became a discussion point on Tuesday night, as Mayor Lee Brain took the issue to the residents of the city as part of the Regular Council session.

Responding to a question on the status of waterfront events this year from Councillor Gurvinder Randhawa, Mayor Brain outlined some of the frustrations that the city has had in making the case with CN for a return to access for the area that some in the community refer to as the last beach on the city's waterfront.

Despite the Mayor's past work as a facilitator, it appears that to this point his communication skills have not resonated with CN officials, with the railway showing little in a way of a change of direction for the topic. Since it was erected in October, the national transportation company has continued to maintain that there is a need for the fence which is found just west of the lightering dock adjacent to the Rotary Waterfront Park.

With Seafest but two weeks away, the Mayor outlined the short and long term options facing the city when it comes to waterfront access, noting that it would not be coming down in time for Seafest.

From his short overview on the impact on Seafest, he returned to the longer term issue of waterfront access and the CN fence, observing that it's the first time that the fence would block off access for Seafest and then urged the community to express their concern about to CN, asking for the residents of the city to help the city in its efforts with CN.

"We've been in consistent negotiations with CN around the fence, and obviously it is something that the community ... it's certainly a negative impact to the community there's no doubt about it. We feel that, that beach should be a public access beach, that it should be remediated, it should be used for public use, and it's going to be a difficult road to negotiate CN into a position where they would see it that way."

He also provided an indication as to the direction that the City would be taking towards the issue moving forward, noting that both he and Councillor Niesh would be in Ottawa next week and would reinforce the community's concern on the issue with senior CN officials.

"The longer term plan here is to continue to negotiate with CN, that's something that we're never going to let up on. Actually, Councillor Niesh and I will be meeting with Senior executives of CN at the FCM next week in Ottawa. We're bringing this straight to the top, so that they can become aware, especially since CN's motto this year is partnering with your neighbours, so that's a good motto for us to bring to Ottawa."

Mayor Brain highlighted that he believes that there is a solution that can be had, noting that remediation has been done before. He observed that the beach is already fenced off against the track, so he doesn't believe it is a safety issue and offered up a solution of partnership, adding how he believes that the city could could easily have that area developed as a public access beach.


Mr. Brain followed up his Council update with a few more comments for his Facebook page, providing further background to the dispute and providing his legion of followers with the name of a CN Official, as well as both a phone number and email address, suggesting that those that feel strong on the issue of to the railway's fencing decision could express their concerns to CN officials. 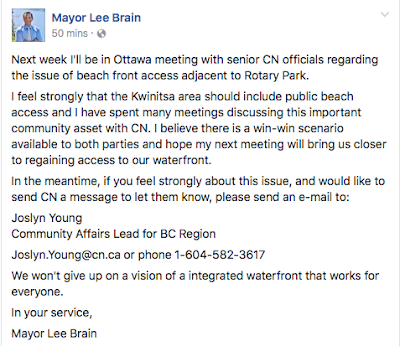 It's not the first time that the Mayor has tapped into his base of supporters on Facebook to address the CN fence issue, as we noted back in October, he was quick to the social media platform to review the situation when the fence first went up.

Differences of opinion between the City and CN are not a new thing, with previous city council's having taken on a number of other topics up with railroad over the years. However, it has long been the access to the rocky shoreline and aging pilings that make up the "beach", that has made for a long running irritant for city officials and the railway.

The CN/City dispute story was also faithfully recorded by the weekly newspaper and from the themes explored through that piece, the comments section at both the Northern View website and Facebook page have started to fill up, as those of readership that have common ground with the Mayor roar out their apparent approval to his approach to the issue with the railway.

You can review the comments from the Mayor from Tuesday as part of the City's You Tube Archive, the topic is introduced by Councillor Randhawa at the 41 minute point.


A full overview of the theme can also be reviewed from our Council Timeline Feature.

We will track the developments on the story as it evolves beyond the Seafest weekend, what news that comes from the dispute can be found on our CN archive page, as well as from our City Council Discussion archive.