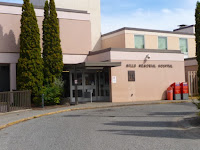 The recent review of results from the Radiology Department at Mills Memorial Hospital in Terrace has apparently set in motion a more expansive review of the past work of Doctor Claude Vezina.

The Terrace based radiologist is currently listed as being under voluntary leave from Northern Health, placed in that status once the health authority announced its review period had commenced.

In an article published on Thursday, the Vancouver Sun relayed the news of an additional two reviews that are now in motion.

The first is a review to be conducted by the College of Physicians and Surgeons of British Columbia which oversees matters of professional conduct in the province.

The Sun also notes that a second review has been taking place through the North West Territories Health and Social Services Authority.

In March, the CBC reported that there are over 2,000  images in the process of being re-read to review the past results from Stanton Hospital when Dr. Vezina was working in that jurisdiction.

Also watching the news out of the west with some interest is the College of Physicians and Surgeons of Ontario, previous to his time in Western Canada, the radiologist was based out of Timmins, Ontario.

As part of their report, the Vancouver Sun has noted that a former Ontario radiologist had expressed some concerns related to the quality of Dr. Vezina's work as part of an eighteen page complaint to officials in the Ontario health system.

The Sun reports that no disciplinary action had been taken at that time, though it's not clear if Ontario plans any further review as a result of the latest developments in British Columbia or the North West Territories.

The first indication of any concern over the results from the Northwest came in February, as Northern Health announced that a review of the work of the Terrace based radiologist who has been  was conducted by radiologists at Vancouver General Hospital.

As we noted in April, from the findings from that review, it was determined that of the 8,400 images that had been examined, 10.3 percent had resulted in a different interpretation that is considered clinically significant.

Northern Health has since forwarded letters to 700 patients advising them to contact their personal doctors to determine if their health care requirements need to be adjusted.

The last public update offered by the Northern Health website comes from this item from April 7th, to this point, the Health Authority has not provided any further information related to the image reviews or on the current status of Dr. Vezina.

You can review the full overview from the Vancouver Sun here, beyond the latest details related to the results reviews, reporter Pamela Fayerman explores some of the plans in motion by provincial officials to ensure that such a situation doesn't occur again.

More notes related to Northern Health are available on our archive page here.

Email ThisBlogThis!Share to TwitterShare to FacebookShare to Pinterest
Labels: More reviews ahead for Terrace radilogist