Three years into a four year mandate, some Prince Rupert city council members seem to be taking note of some concerns in the community when it comes to the limited flow of information the comes from the elected officials to the residents of the city.

Towards that theme and having received a two week heads up on the debate to come, City Council members on Tuesday night heard a call from Councillor Blair Mirau for more transparency, particularly when it comes to how the city handles the issue of Closed meetings and the information that comes from them.

The first term City Council member offered up a short overview of some of the perceptions from the public when it comes to the frequency of meetings that are held behind closed doors and noted that there are some unique areas where the City must remain in a confidential mode, particularly the Watson Island and LNG development files.

However, during the course of his presentation he urged council to consider an approach that would give the community faith that they are conducting closed meetings only as required.

"A fair question I got afterwards on this  motion about an in camera communications policy was "why now?"  And the quick answer is that I wanted to be proactive, I think that given the amount of closed meetings that we've had, people rightfully have questions for us and more often than not we can't actually legally give answers ... so essentially the motion the way that I've designed it, essentially is just to ask staff to develop an in camera policy to come back to us with,  but also to develop a policy keeping in mind the best practices of the ombudsperson."

As he noted in his comments to Council, the main thrust of Mr. Mirau's motion was to have the city adopt a ten point policy related to Closed Council sessions, based on the Ombudsperson's office report, six of which the City currently follows, the other four he observed account for more than the legislated minimum.

Those ten points which were made as part of the resolution before Council can be reviewed below: 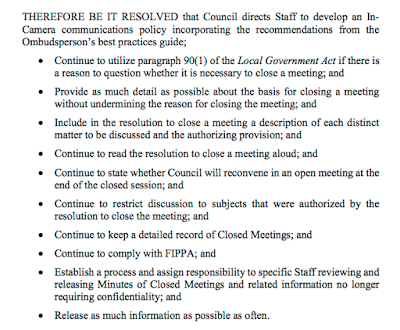 Mr. Mirau also noted that when it comes to reporting on those meetings, that Council should do more than the legislated minimum in order to provide assurance to the public that Council is being proactive in their disclosure.

Following his notes on the theme, Mayor Brain offered the topic up for further discussion, however no members of Council took that opportunity to weigh in on how the current closed meeting process works, or what ambitions that they may have for it in the future.

Later in the Council meeting Councillor Cunningham would touch on Mr. Mirau's motion, as he expanded on his own concerns over the lack of information that the city relays to the public from it's various departments.

As for the topic of Closed meetings, the Mayor did provide a few observations of his own towards Mr. Mirau's motion.

He followed up on some of the concepts that Mr. Mirau made mention of, reviewing some of the themes that brought the issue to the discussion table on the night.

"I'll echo what councillor Mirau is saying, I think absolutely we don't necessarily want to be in a position where we are always having closed meetings so to speak, but we do have some legal challenges, with Watson Island in particular which requires confidential meetings. And so it's just part of the role that we have here at the City of Prince Rupert, it's unique to us. You know, whether it's negotiations going on, or labour issues these are things that are standard practice that communities have to have in closed meetings "

Returning to Watson Island as one of the challenges that the City faces, (though while not disclosing any new notes on those issues), Mr. Brain observed that at one time or another, when things are finally resolved with Watson there may be a book written about the saga of Watson Island.

However at the moment the Mayor noted that they are doing what they can within their jurisdiction.

Mr. Brain did acknowledge that he agreed that Council could communicate more effectively to the best of their ability to make sure that they are putting as much as they possibly can to the public, so that everyone feels confident that the city is managing the communities affairs within the legal boundaries.

Considering the volume of time that council members have dedicated towards other topics at previous council sessions (some of which perhaps have little impact on civic governance), it's somewhat disappointing that few on Council had anything to add to the discussion on transparency and accountability.

For a topic that should have generated observations from all in attendance, in the end the theme provided for but six minutes of discussion towards the goal of a more transparent City Council.

You can review the full presentation to Council from the city's You Tube Archive page, starting at the 26 minute mark.

A more expansive look at the conversation on Closed meetings from Tuesday can be found on our City Council Timeline feature.

Further background on City Council topics can be reviewed on our Council Discussion Archive page.
Posted by . at 11:56 AM