Politicians at both the federal and municipal level have offered up some thoughts on the results from Tuesday night's 2017 British Columbia election campaign, with both Prince Rupert Mayor Lee Brain and Skeena-Bulkley Valley MP Nathan Cullen taking to their social media pages to share their themes on what was a remarkable night on the province's political scene.

Mayor Brain posted a pair of photos from his tour of the campaign offices for two of three candidates, taking a quick snapshot with both Liberal Herb Pond and the returning NDP MLA Jennifer Rice as part of his travels on the day.

In a Facebook post, the Mayor offered his thanks to all three candidates for their efforts in the 2017 campaign (though with a bit of a prompt from a reader who caught his oversight when it came to Mr. Arendt) and outlined his eagerness to work with Ms. Rice and whichever party forms the new provincial government in the days ahead. 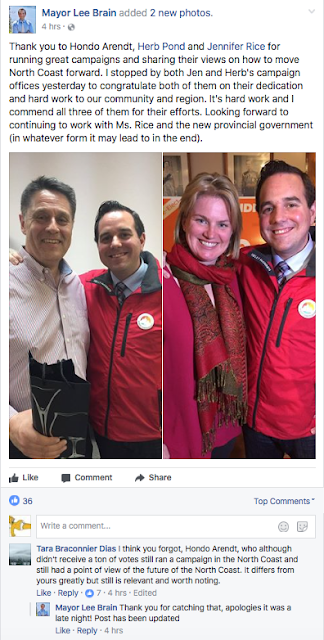 For his part, Mr. Cullen focused more on the larger picture of the British Columbia election, calling the vote totals of Tuesday evening a stunning result, while working in another call for his ongoing efforts towards electoral reform.

With a nod to the Northwest results, the NDP MP offered his congratulations to the returning MLA's of Doug Donaldson, John Rustad and the North Coast's Jennifer Rice.

At the same time, the Senior politician from the Federal scene also extended a welcome to the newly elected Liberal MLA Ellis Ross from Skeena, who now joins the ranks of the politicians club of the Northwest. 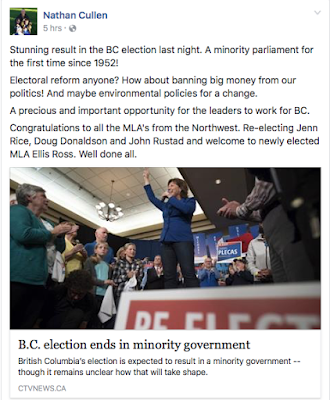 Also heard from, as part of a social media shout out was Andrew Merilees, the Mayor of Masset. He offered up his congratulations to the re-elected Ms. Rice and the BC NDP with a comment attached to our North Coast Vote review of today. 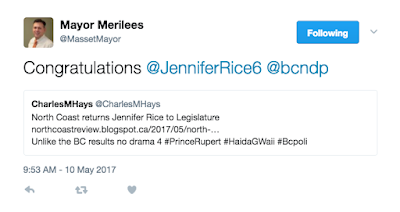 You can review some of those notes from last night's vote from our North Coast Votes archive page.

More background on the provincial vote can be found on our Political portal D'Arcy McGee.

Email ThisBlogThis!Share to TwitterShare to FacebookShare to Pinterest
Labels: Politicians of the NW react to BC election