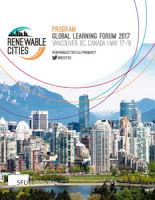 A trip to Vancouver last week by Mayor Lee Brain for a three day sustainable cities conference clearly has renewed his personal energy on the theme, as well as to provide him with some new thoughts on how to better engage Prince Rupert into the goal of  becoming a more sustainable community.

As part of Tuesday's Council session, the Mayor was anxious to share some of his observations from the trip, as he provided a thumbnail sketch of some of the elements of the conference that resonated the most with him.

During the course of his short overview for Council, Mayor Brain outlined some of the exciting developments he had heard about from leaders from as far away as Rio de Janeiro, Japan and Germany.

From his observations of the conference he noted some of challenges that rural communities face in developing sustainable initiatives and how they can achieve some of their goals. He also shared some of the background information that he had taken in when it comes to the availability for Green initiative funding for the community through the Federation of Canadian Municipalities.

Mr. Brain also put some of the focus of the International conference into a local perspective, noting how he would like to enable Prince Rupert as a community to become leaders in this world.

He observed how that doesn't mean that the City has to take the lead, but rather how it could serve as a support to people and the community to enable that vision.

Towards those ambitions, he pointed towards the city's 2030 sustainable cities policies which will be delivered to City Council shortly.

From those policies, the Mayor is proposing that Council take them to the public to seek their engagement towards achieving some of the goals of more sustainability.

Earlier this month, Hans Seidemann the City's Manager of Community Development provided an update on the City's Community Energy and Emissions plan, as part of the discussion from that report Mayor Brain expanded on some of his passion for the theme of sustainability in the local environment.

The Mayor carried some of that enthusiasm to the Vancouver gathering and on into his social media notes during the course of last week's sessions. As both he and Mr. Seidemann, offered updates to their twitter feeds showcasing some of the themes that had caught their attention. 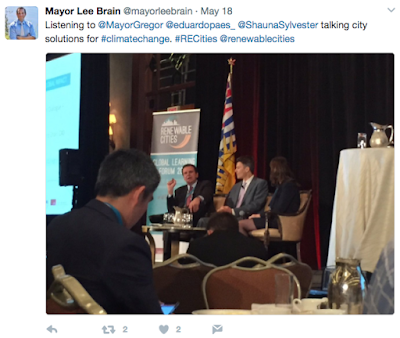 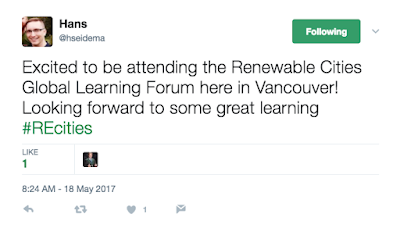 The full review of their time in Vancouver can be found from the City's Video Archive, starting at the thirty eight minute mark.

More notes from Tuesday's council session can be found on our Council Timeline page.

While a larger overview of Council Discussion points can be examined on our Archive page.

A look at some of the city's initiatives as part of the 2023 Sustainable City program can be found here.
Posted by . at 4:50 PM

Email ThisBlogThis!Share to TwitterShare to FacebookShare to Pinterest
Labels: Mayor offers up notes on recent trip to Vancover