A leaking hot tub at the Earl Mah Aquatic Centre has been determined to be a problem that has but one solution, the acquisition and installation of a new one and towards that goal of an upgrade to the soothing water jets at the pool, the City of Prince Rupert has now put the project out for bid.

Last week the City posted a Request for Bids to the BC Bid website seeking proposals from qualified aquatic design architects and sub consultant teams for a design to accommodate the replacement of the existing hot tub at the Earl Mah Aquatic Centre.

As part of the request for Bids, the city has provided a look at a report into the existing hot tub, which outlined the nature of the leak and the volume of water that has been escaping from the existing tub, which was estimate to be one half its volume over a 24 hour period.

From the findings of that report, it was decided that replacement was the better option as opposed to repair of the existing tub, with the investigative process for bids now underway.


The proposed schedule for the replacement project would see the contract awarded by early June of this year, with a design development plan to be completed by late July.

It is noted in the City's documentation that final construction funding may not be secured until mid January of 2018 and with that in mind, construction on the project would not start until July of 2018.

Demolition of the existing set up would take place from July to August of 2018 with the final testing and commissioning to take place in November, with the new tub to be put in service my mid November. 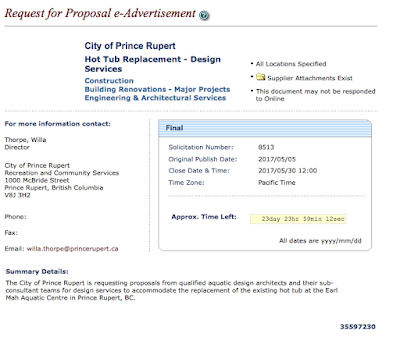 You can review the full bid package including reports  and observations from the BC Bid site.

The deadline for applicants to indicate their interest in the project is Tuesday, May 30th.

For more items related to City Council discussion topics see our archive page here.
Posted by . at 9:25 AM