The next chapter for the Fairview Container Port Story arrives Saturday

There will be little time for rest this weekend for officials of the Fairview Container Port as port operator DP World prepares to take possession of the three giant gantry cranes destined for the newly expanded dock on the west side of the Prince Rupert waterfront.

The three heavy lift cranes will arrive aboard the heavy load carrier ship Zhen Hua 25, which is currently steaming towards Prince Rupert, destined for a Saturday morning arrival scheduled. 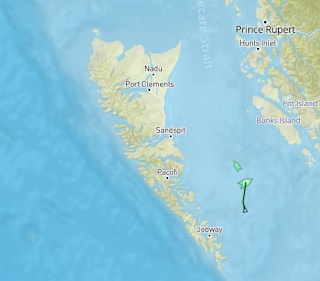 Once tied up alongside the Fairview facility it is expected to take several days to unload the Malacca Max dock cranes, which once installed, will add to the Port's reputation as a Big ship ready facility and increase the level of container movements through the port.

The Mallaca Max cranes are equipped with a horizontal reach of 25 containers and will be capable of working the largest vessels that are currently part of the world wide container shipping fleet.

The port expansion is anticipated to be completed by the third quarter of this year, when the new cranes go into service they will increase the Port's ability to move containers through Prince Rupert by half a million TEU's, which will boost the Port's current capacity of 850,000 to 1.35 million TEU's.

A sample of what North Coast residents will see on the waterfront tomorrow can found from the video below, which features the Zhen Hua 25 delivering container cranes to a British Port back in 2015.

As part of Saturday's maritime ballet of movements,  the Zhen Hua 25 will be escorted by tugs from SAAM SMIT Towage which will help the ship execute a slow turn before the berthing process at Fairview.

In addition to those working the water for SAAM SMIT, a team of BC Coast Marine Pilots will be aboard the transport ship as part of the vessel's arrival in Prince Rupert.

Also escorting the new cranes to their new home will be the Prince Rupert Port Authority patrol boat M.V. Charles Hays. The port's vessel will accompany the ocean carrier from the Kinahar Islands and will be primarily focused on ensuring that any nearby water craft maintain a safe perimeter of at least one nautical mile from the 50,000 tonne delivery ship.

Those wishing to follow the arrival of the ship and the cranes at Fairview can take advantage of two social media streams that the Port will be setting up for Saturday.

Updates on the progress of the cranes arrival and images from the Fairview site on Saturday will be streamed through the Port's Facebook page and twitter feed.

More background on Saturday's arrival can be reviewed from this media release from the Port.

For more items related to Fairview Terminals see our archive page here, while our notes on other Port of Prince Rupert developments can be found here.