The introduction of the new BC curriculum has served as an opportunity for School District 52 to join other School Districts in British Columbia, part of a coordinated effort to seek out additional funding for the delivery of Aboriginal education programs in the District.

In a letter from April 28th addressed to Education Minister Mike Bernier, SD52 Chair Tina Last outlines the background of the Prince Rupert School District's Aboriginal Education Department, highlighting of the elements of the program that is currently in place.

With the introduction of the new BC curriculum Ms. Last also makes note of the formal integration of Aboriginal curriculum in all classes and how it works towards the ongoing efforts for reconciliation with the District's Aboriginal students and families.

As they look to expand on that initiative, the School District is writing in support of the Central Okanagan School District 23 which is seeking additional core funding for Aboriginal learning resources and staff in order to support the implementation of the redesigned curriculum.

"As we work for reconciliation with our Aboriginal students and families, we can think of nothing that would better demonstrate our resolve than an infusion of additional funds directed towards Aboriginal education" -- A portion of a letter seeking additional funding for Aboriginal Education programs from SD52 Chair Tina Last to Mike Bernier, the Minister of Education

The letter was delivered as the provincial election campaign was underway, which would suggest that any reply may have to wait until its determined if Mr. Bernier returns to his post or if a new minister of education takes office following the election vote count of later tonight.

For now, you can review the full correspondence by expanding the image below, of clicking on this link to the SD52 website. 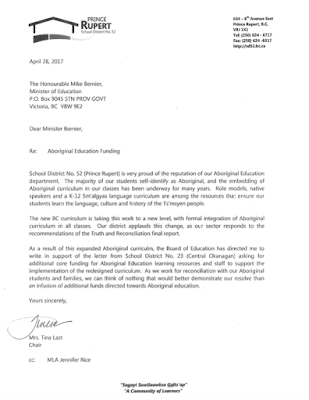 For more items related to education on the North Coast see our archive page here.