And now with the negotiating, we await a government. 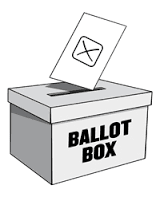 'Welcome Back, my friends to the show that never ends ...
We're so glad you could attend!
Come inside, Come inside!
--Emerson Lake and Palmer

After a two week hiatus, the voters have finally spoken in Comox-Courtenay with the delivery of the final numbers from Election Day.

The Vancouver Island constituency, is a riding probably not of much notice to British Columbians prior to May 9th, but one which was thrust into the spotlight on election night with a razor thin vote count that tentatively gave victory to the NDP.

Just as British Columbians were to settle in for their Wednesday evening dinners, the election night decision finally was confirmed once and for all.

As the May 9th results were reviewed and absentee ballot votes added to the mix, the NDP actually built on their narrow lead of election day on Vancouver Island to claim the riding by 199 votes.

Elections BC which clearly prefers the glacial approach to their post election vote counting measures, managed to add two additional days of drama to the Great BC Vote Count project this week, taking us from the May Long Weekend into late Wednesday afternoon before the final provincial seat tally was announced.

The accounts of the balloting now set to list those who will assemble in the Legislature, once we have some idea as to who will form a government.

As the updates tricked out through the afternoon, Liberal leader Christy Clark,  seemingly decided that she didn't need to wait for any official breakdown of he final total, the political path ahead of her seemingly set in her mind.

Still technically Premier elect Clark for a moment one assumes, she issued a notice through the dinner hour yesterday to note that the Liberals would be looking to form a government. Using the term plurality rather than the more widely noted observation of the day of a minority government, the first for the province since the 1950's. 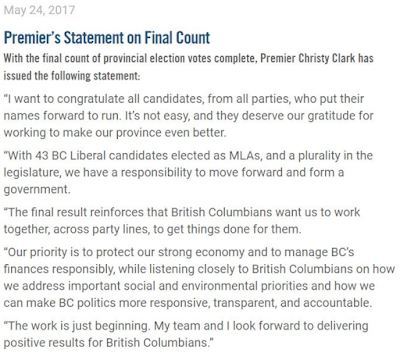 Whether Ms. Clark's ambitions come to pass will be in the hands of negotiation teams for the Liberals and Green Party, with the bargaining soon to heat up, as the Liberals review just how much of the Green demands they can possibly accept in a quest to remain in power.

Andrew Weaver, the leader of the Green's will seemingly take a page from the Election BC guide book, suggesting that it may be at least a week before he and his caucus are finished consulting with both the Liberals and the NDP and decide which way their political weather vane will swing when it comes to putting a provincial government in place.

Waiting patiently no doubt for all these political winds to settle down will be North Coast MLA Jennifer Rice.

As Elections BC issued the final notes for North Coast campaign the numbers realigned a bit, but the final results held firm for the most part from election day.

Hondo Arendt picked up an additional 17 votes good for 9.31% and 826 Green ballots counted, while Mr. Pond increased the BC Liberal's vote percentage to 33.66% adding an additional 200 votes to bring his final tally to 3,079.

The shift in numbers in the end however, had no impact on who gets to pack their bags and head off for Victoria. Ms. Rice, held her overall victory by a significant margin, increasing her vote total by 245 ballots to 5,243 votes, good for 57.31 per cent.

The re-elected NDP MLA has not had much to say since her election day victory, offering up a short update on Tuesday through her Facebook page, mainly to confirm the final numbers from Elections BC and to once again give her thanks to  those voters that gave her their vote.

She like everyone else in BC, will be watching to see how the negotiation dance ahead moves forward and who has the dance partner when the music comes to a stop. 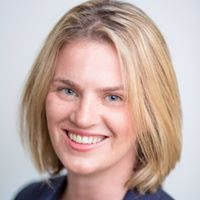 How the story evolves over the next week could mean the difference in how three potential scenarios play out for the newly elected Ms. Rice.

An NDP partnership with the Greens would mean that John Horgan would be in the cabinet making business, the first time for an NDP Premier since the Glen Clark/Dan Miller/Ujjal Dosanjh days of 1996-2001.

The prospect of a Premier Horgan  era offers up two potential paths for Ms. Rice, one a cabinet spot and more prominence in the Legislature and the added bit of cash to a pay package to go along with such responsibilities.

The alternative NDP scenario would see a return to the back benches for the MLA from the North Coast, though with the potential of additional work in support of the work of Mr. Horgan's cabinet ministers.

Should Christy Clark find the right tone for the Greens and retain her post as Premier, Ms Rice's station in Legislature life would return to the familiar life of an opposition MLA, perhaps with a spot in Mr. Horgan's shadow cabinet.

Regardless of how the immediate future shapes up, one thing seems certain, if the history of minority governments is any indication at some point before the normal four year mandate of a government the minority situation will send us all back to the voting booth.

Something that will send Ms. Rice back to the election trail to seek the support of the voters one more time.

Wednesday's latest developments made for the majority of the provincial news filings for the day, some of the various stories and punditry can be reviewed below:

BC Liberals denied majority as final election count leaves government in danger
With all the votes finally counted in B.C., this is where the bartering gets real
B.C. Liberals fall short of majority following final vote count
B.C. NDP and Greens working on a governing framework, 'but we don't have that today'
NDP wins in Courtenay-Comox, leaving Liberals with minority government
A Green deal can give Clark or Horgan keys to power
B.C. Liberals to make pitch to continue government as a minority in legislature
B.C.'s political drama has only just begun
It's Official: Liberals 43, NDP 41, Greens 3
Christy Clark says B.C. Liberals 'have a responsibility' to form a government
B. C Green leader Andrew Weaver says his caucus wants a stable minority government
NDP Leader John Horgan is optimistic about making a deal with B.C. Green Leader Andrew Weaver
NDP win in Courtneay-Comox; Clark will try to form government
NDP government looks more likely
'Work together,' but with whom?
B.C. will have first minority government in 64 years
NDP wins Courtenay-Comox riding; minority government confirmed

You can review some of the background notes to the last two weeks of political mystery through our BC election Digest feature, our political portal D'Arcy McGee has been tracking some of the daily developments since Election Day.

The latest of updates can be found here.

Email ThisBlogThis!Share to TwitterShare to FacebookShare to Pinterest
Labels: Final vote tallies announced from May 9 election