684 potential new acquaintances began exploring Prince Rupert this morning, as the Oceania Cruise Line vessel MS Regatta pulled up to the Northland Cruise Terminal, signalling the launch of a new Cruise season on the North Coast.

The Regatta arrived  in port at 10 AM with the first of the passengers coming off the vessel shortly after 11.

Those that came ashore were heading off under light clouds and occasional bursts of Sun, set to learn more about the region, whether on tour, or by foot exploration through the downtown and Cow Bay areas and beyond.

The vessel is set to depart from Northland at 7 PM tonight.

The first port call for 2017 heralds an expanded schedule of arrivals as Prince Rupert cruise officials look to continue to establish the community as a stop of interest for the Alaska Cruise providers who transit the West Coast from Vancouver and Seattle North to Juneau and Anchorage.


Final preparations were underway through the week as tour providers reviewed their plan for their guests and in the case of the bus tour that rolls through the city provided for a dry run of their route.

Prince Rupert's Cruise Ambassador Program was on hand today for their first day of a season that will take them through to the last ship of the year on October 1st, when the largest ship of the year The Norwegian Jewel, calls on the city.

Those working through the Cruise season will ease into their work with only two port visits set for May and June, July will be the busiest month with eight port calls, August features seven and September four.

Cruise Prince Rupert has an online presentation available to inform visitors as to what's available in the community when they cross over the walkway at Northland Terminal this year.

The Prince Rupert Port Authority also has some overall information on the industry, as well as some background on the facilities that are part of the Prince Rupert cruise infrastructure.

The 2017 Cruise Schedule can be found below: 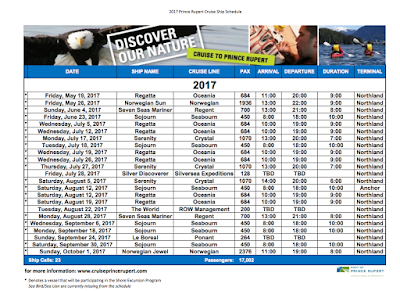 You can follow the latest notes from the 2017 Cruise season from our archive page here.
Posted by . at 1:12 PM