The design has been finalized for what would be an urban oasis in the heart of the McKay Street/Kootenay area of the city and now with the designs in hand, Transition Prince Rupert is launching the fundraising campaign to bring the blue prints into reality.

A notice posted to the Transition Prince Rupert Facebook page and website on Tuesday introduced the ambitious campaign tor raise 100,000 dollars, an amount noted by Mayor Lee Brain as the beginning target that will be used to build the McKay Street Park.

The project would see a re-purposing of the Kootenay Avenue ball field, with a proposal that offers up the potential of a Skate Park, Basketball Pavilion, Cultural Centre, Nature area, Picnic grounds and Dog walk to name a few of the features included in the design.

In addition to the local fundraising program, Transition Prince Rupert and those working on the park project will be looking to apply for a range of grants and will be seeking private donations towards the development of the plan.

The Transition Prince Rupert website notes that the first stage of actual work on the site will be to clear the area and make small improvements as they continue to seek out those grant opportunities and seek out contributions from private donors to deliver on the bigger park components.

The project has been an ongoing initiative for Transition Prince Rupert for a few years now, with the local organization overseeing the project with a steering committee made up of six different community groups in town.

The design work was provided by the Portland based community group the City Repair Project, which held a number of consultation sessions with community residents over the last year to develop the themes for the west side neighbourhood.

Mayor Brain, who was once on the Board of Transition Prince Rupert gave the fundraising efforts a shout out through his Facebook page yesterday.

The Mayor was also one of the early donors towards the 100,000 dollar goal. 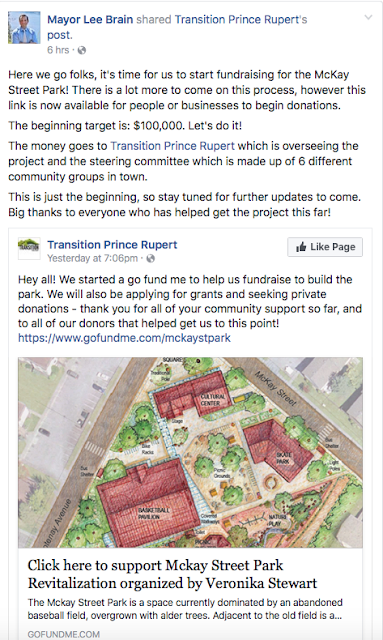 While Prince Rupert City Council has not held much in the way of discussion during their public Council sessions on the proposed change of direction for the neighbourhood ball field, it as been a feature as part of the Mayor's Hays 2.0 Vision planning, noted as a key element of the Sustainable City 2030 concepts.

You can find more information about the proposed development from the Transition Prince Rupert information streams, while the Go Fund Me page where donations are being accepted can be found here.

Some background on the process that has led up to the launch of the Go Fund Me campaign can be found here.