Today was Prince Rupert's time to shine in the spotlight of provincial television and while the Sun chose not to make an appearance, the cloudy skies and occasional light rain shower did not deter a hearty group of McKay Street residents from taking to the front of the would be park. Gathered at the corner of McKay and Kootenay to show their support and help get out the vote in the BCAA Play Here competition.

As we outlined on the blog yesterday, Global assigned Prince Rupert the Wednesday spot to make its pitch to the entire province by way of Skype. From that opportunity it was Transition Prince Rupert's Veronika Stewart who served as the Prince Rupert host for the short three minute feature.

Through the course of the quick overview she  provided a quick guide as to what kind of change the project would bring to the McKay Street area for Global's morning host.

The morning feature began with replay of the short video production that Transition Prince Rupert had created as part of their entry to the competition, filmed on a day which seemed much like today with rain coats and kids, featuring Mayor Lee Brain making the pitch.

Mr. Brain is away in Ottawa this week at the Federation of Canadian Municipalities conference and was  unable to be in attendance for today's Global TV feature.

You can view this morning's feature here.

The Global presentation is one of ten that the TV station is providing as part of their support for the BCAA competition, you can check out what Prince Rupert's competitors are up to here.

As of this afternoon Prince Rupert still holds a lead on the list of ten, holding down 17,853 votes, however, there has been movement from other locations.

Most notably among those nipping at the heels of the North Coast, is Bouchie Lake Elementary School near Quesnel which now has closed the gap to under 1850 votes with a total of 16,006.

The voting continues through until June 18th.

Prince Rupert is in the running for up to 100,000 dollars in park revitalizations, with three placements available once the competition comes to an end. 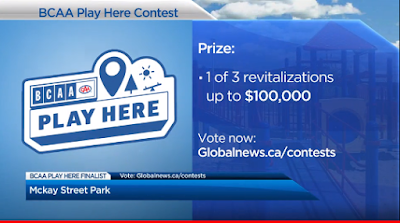 Local residents can learn more about the McKay Street Project from the Transition Prince Rupert Facebook page, you can also participate in a Go Fund Me Campaign by making your donation here.

More items related to Community events can be found on our archive page here.