McKay Street Park Project is ready for its Global BC close up!

Tomorrow morning is showcase day for the proponents of the McKay Street Park project and its ongoing quest to get the most votes for the BCAA Play Here competition.

Global BC's Morning News will feature the McKay Street proposal as part of its ongoing presentations of the contending communities, and to help show some community spirit towards the vote count, organizers are asking for a large community turnout at the Park tomorrow morning.

The Global live hit  feature is scheduled to take place at 8:15, and organizers would like those that can help out to show up just before 8, complete with Vote for McKay Street Park signs or other signs to show their enthusiasm for the Prince Rupert project.

The television station's archive of the seven segments provided from other communities can be found here.

Mayor Lee Brain, who currently is in Ottawa as part of the Prince Rupert delegation to the Federation of Canadian Municipalities Conference, has been busy on his Facebook page over the last week, urging residents to vote, noting that Rupertites can cast their ballots four times a day through four different options.

He issued the community call for participants last Friday morning. 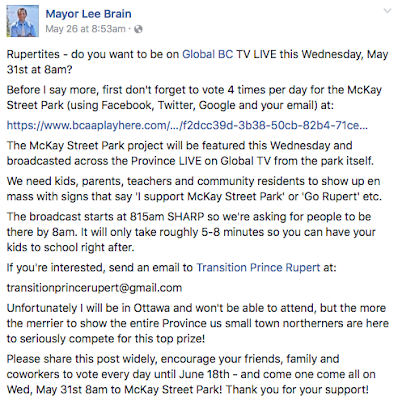 So far, Prince Rupert residents have responded with enthusiasm to the community challenge, with the McKay Street Park proposal currently holding down the most votes so far of the ten communities in the competition which comes to an end on June 18th.

As of this afternoon the Prince Rupert entry has received 15,072 votes, building up a nice lead over the rest of the field, but as has been noted by the Mayor through the weekend, the other towns have taken note of Prince Rupert's efforts.

Four other communities have crested the 10,000 vote mark so far as we head towards the final day of May and the sprint to the June 18th finish line.

Marion Schilling in the Okanagan town of Valleyview is at 11,708 votes
Galiano Community School on Galiano Island has 11,702 votes
Bouchie Lake in the Cariboo counts 11,687 votes to date
W.E. Kinvig Elementary in Greater Vancouver's Newton area has 10,508 votes

The full review of all the communities can be found here.

The BCAA Play here synopsis for Prince Rupert can be reviewed from the competition website here.

More on the Transition Prince Rupert plans and the preparation for tomorrows Global BC interview can be found from their Facebook page.

The Transition Prince Rupert website also provides a link to the Go Fund Me page that is currently underway to seek out funding from members of the community, you can contribute to that initiative here.

Over the last couple of weeks we have offered up a couple of notes on the quest for funding for the McKay Street plan, those notes can be reviewed below:

For more notes on Community Events on the North Coast see our archive page here.

Email ThisBlogThis!Share to TwitterShare to FacebookShare to Pinterest
Labels: McKay Street Park Project to get Global BC close Up