At one time the Australian LNG giant Woodside seemed quite bullish on the prospects of LNG development in the province, putting together a pair of Canadian plans, with the Prince Rupert region one of the potential sites that they were looking at for development of an LNG terminal as they looked to bring Alberta and British Columbia's gas reserves to world markets.

As recently as one year ago, Woodside had flagged the Grassy Point area north of Lax Kw'alaams as one area under consideration, going so far as to host an Open House at the time to keep North Coast residents up to date on their plans.

However, that interest it seems has cooled off over the last twelve months, with global financial twists and a shift in focus towards Kitimat seemingly knocking Prince Rupert off the immediate plans list.

When it comes to mentions of any development for Prince Rupert, the last focus put on Grassy Point by Woodside came back in 2016 when a 30 day comment period was opened.

Even the Government sites tracking LNG development have seen few mentions of the proposed development over the course of the last year.

The Province of British Columbia's EAO project page still lists Grassy Point as 'In Progress" while the last entry on the CEAA website for the proposal comes from November of 2014, when the Provincial process took over as a substitute.

As for their global development plans moving through this year and beyond, Woodside hosted an Investor Briefing Day yesterday, designed to bring current and would be investors up to speed on where the company if looking towards near and short term.

As part of that presentation company officials provided their blue print for 2017, with much of their attention returning to their side of the Pacific Ocean and those nations a little closer to Sydney, while other areas of potential development included Africa and Ireland to name a few locales.

That's not to say that British Columbia didn't get some attention from the Australian company, with their Canadian plans still part of the presentation, though listed much later in the presentation and more of a long term focus than of any impending production plans. 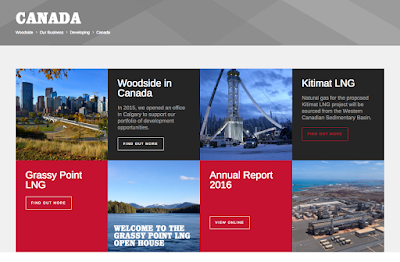 While the Grassy Point proposal is still featured as part of their overall BC holdings, any new details related to the proposed project didn't make it into the annual report for investors as part of the Tuesday presentation.

The main direction for Woodside's interest in Kitimat would appear to still be in some form of long term development. With the Australian company continuing to work on reducing the cost of the proposed pipeline and terminal aspects of their development plans.

The Kitimat plans are reviewed as part of Woodside's Horizon III planning, featuring a timeline of 2027 and beyond.

The majority of the key Kitimat related material goes from pages 64 - 66 of the 108 page report, which is available for review here. 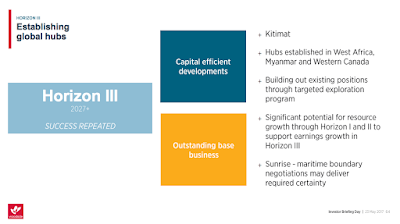 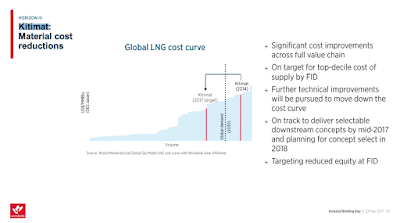 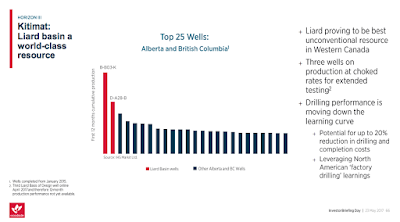 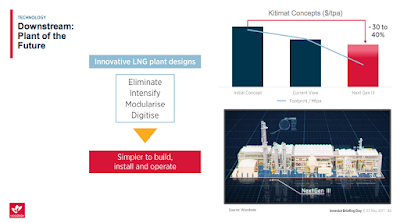 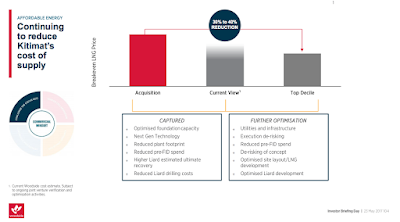 Our past notes on the Woodside proposals for the North Coast can be found below: