A need for more details on McKay Street safety issues

In all the excitement over the pursuit of a potential prize of 100,000 dollars for the McKay Street Park project, was a line in Mayor Brain's original notes related to the BCAA competition, a commentary that should stand out for residents far beyond the corner of  McKay Street and Kootenay Avenue.

As part of his preamble to the get out the vote campaign, was an observation from the Mayor that suggests to the reader that there is perhaps a bit more in the way of civic engagement to be done in that neighbourhood, beyond the ambitious parkland redevelopment project that has been proposed.

In the enthusiasm for the project, the Mayor offered up a short overview of how the project would rejuvenate the area, including one line that indicates that there are some very real problems that should be addressed sooner rather than later. 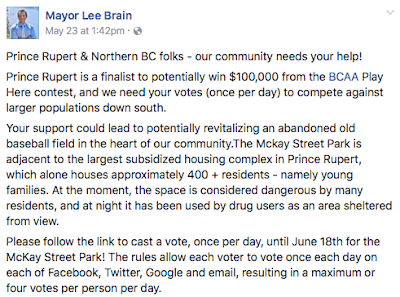 What should catch the attention of all who live in Prince Rupert is the observation of "At the moment, the space is considered dangerous by many residents, and at night it has been used by drug users as an area sheltered from view".

Moving beyond the hopeful quest for BCAA money for the potential park development, City Council might want to offer up some guidance for the residents of the area (and others) as to what immediate steps they (and the local RCMP detachment) are taking to make the city's neighbourhoods safer.

The subject of the level of crime, or public safety in the city is one that doesn't seem to get much attention from this current City Council.

A past practice that used to be a feature of previous City Council's no longer seems to be popular, as Council members no longer appear to invite the head of the RCMP detachment to Council chambers to provide any updates for the city's residents.

It's a missing element to the Council process which leaves residents somewhat out of touch with their local police department, whether through the delivery of local crime stats, or through a general outline as to what initiatives that the local detachment is currently engaged in.

Other than the occasional request by residents of council members for some help, usually made during public comment opportunities at City Council, the elected members rarely make mention of issues related to personal safety, whether it be in the McKay Street area, or anywhere else in the city for that matter.

Other communities around the Northwest frequently hear reports from their police departments as to what kind of challenges the front line officers are facing and how the community can help in the cause of public safety.

Terrace Council members for instance hear updates from their detachment on a regular basis and the Terrace RCMP is very active on social media and through their local website to provide updates on what is happening in that community.

It's a blue print from the east that perhaps Prince Rupert Council might want to adopt to provide more information to residents here.

Fore a look at some of the past work of Emergency responders from across the Northwest see our  monthly archive page here.