The provincial body which oversees BC Ferries has outlined its recommendations on fares for a four year period to start on April 1, 2020, with the BC Ferries Commissioner announcing a preliminary decision to recommend a maximum 2.3% increase to ferry fares annually through to 2024.

The Announcement which was released on Monday featured the findings from a Report related to the Price Cap decision process, which included a number of notes of interest on the current performance level for the BC Ferry service, with the Commissioner flagging six items for consideration by the public. 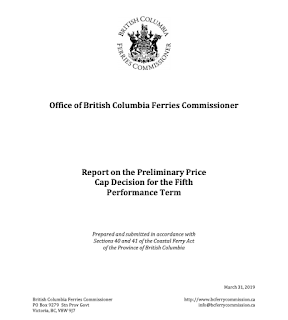 In fiscal 2018 BC Ferries delivered 79,082 round trips, exceeding the required trips under the Coastal Ferry Services Contract by 2,962.

BC Ferries implemented average fare increases that were lower than the 1.9% they were allowed for performance term four.

Fuel costs, the second highest operating cost for the service and projected to be $108.7 million in fiscal 2019, have been effectively managed and are expected to decline primarily due to higher usage of LNG fuel.

Long-term capital plans will have a moderate impact on performance term five price caps but could have a larger impact for following terms.

The full report to the Commission can be reviewed here.

BC Ferries Commissioner Sheldon Stollen made note as to some of the challenges that BC Ferries faces as they look to provide service and offered some observations on the findings of the recent Redlin report as a guideline to follow.

“BC Ferries have fully cooperated in providing the commissioner with the information he needs to make a preliminary price cap decision. I am pleased to see the price caps tracking close to the Consumer Price Index for British Columbia. The major challenges to operating a world-class system that is affordable to the riding public and taxpayers can be expected to persist and even deepen. The commissioner will applaud any effort by BC Ferries and the Province to address the Redlin report recommendation for a jointly developed vision to address them.”

You can review our notes on the Redlin report here.

As part of the Commission's review of the current state of the Ferry Service and its recommendations on price caps for the next four year period, the Commissioner also noted that the Commission is urging BC Ferries to develop a plan to convert their fleet to an all electric service as soon as infrastructure and technology is available.

The Commission has also recommended that BC Ferries consider possible reductions in their long-term capital plan to ease pressure from future price caps and to develop a tracking process and reporting requirement to meet targets for reducing operating, maintenance and administrative costs.

You can review Monday's announcement here, and explore more on the Commissions findings here.

The proposed Ferry increase for 2020-2024 is not quite the last word on ferry rates for the process, that will belong to the public, who have until June 30th to share their thoughts on the recommendations of the Ferry Commission.

Should you wish to become involved in their engagement process, you can forward your comments by email to info@bcferrycommission.ca  or by regular postal mail at the address below:

More notes on ferry transportation on the North Coast, Haida Gwaii and Southeast Alaska can be found from our archive page here.

Email ThisBlogThis!Share to TwitterShare to FacebookShare to Pinterest
Labels: Ferry Commissioner on ferry rate increases for 2020 to 2024