Kitimat is currently the Hot Spot on the province's LNG development map with the LNG Canada project moving forward with its plans towards terminal development and as we outlined earlier this week, Kitimat LNG making an approach to the National Energy Board to double their proposed output for an LNG facility at Bish Cove.

And Kitimat is not alone in the Northwest when it comes to LNG planning, with the Nisga'a Nation making note of their own plans last month with an advisory for its members.

In the March 29th communique to Nisga'a Citizens, the Nisga'a Lisims Government noted that in light of renewed interest in the Liquefied Natural Gas Sector, Nisga'a leadership had met to determine the path forward for the Nisga'a Nation.

In their update they observed that the Nisga'a Lisims Government is actively engaged in facilitating preliminary site assessment activity with prospective proponents who have interest in LNG development on Nisga'a Lands and within the Nass Area.

Towards that interest, the Nisga'a Government is advising residents that they may be seeing increased activity in the Nass Valley with increased helicopter and ground traffic as preliminary investigation of the area from a number of prospective proponents. 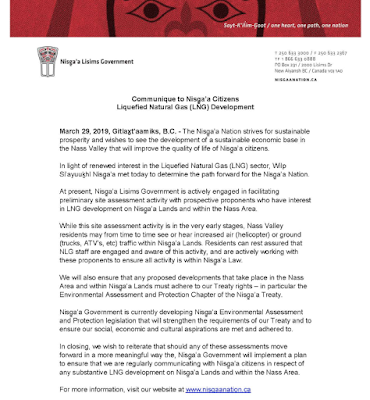 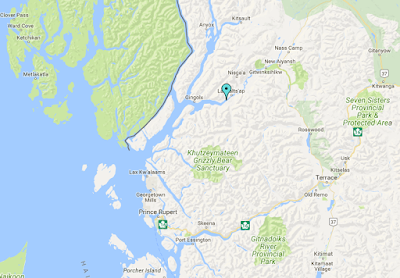 The Nass Valley was one of a number of areas that was on the LNG Map in the heady days of a few years ago when there were over a dozen LNG proposals listed across the Northwest.

In 2014, the Nisga'a Nation had signed a number of benefits agreements with the then Liberal government in Victoria.

Included on that list of potential development sites of not too long ago was Prince Rupert which at the time was the host for five potential projects, none of which ever made it to the finish line.

The renewed interest in the Nass and other locations comes as the NDP government moved forward its new Income Tax provisions for the LNG industry.

With the new legislation from Finance Minister Carole James clearing the Legislature on Thursday.

The successful navigation of the legislation provided for a few comments from the Premier who hailed the opportunities that it offers, particularly in the Northwest. 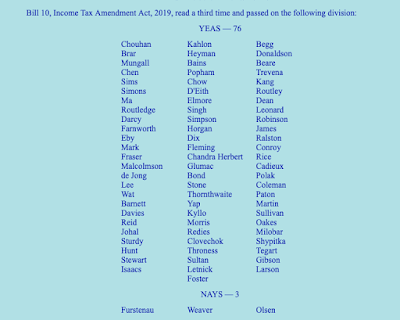 So far the theme of any potential LNG development for the Prince Rupert region has not made a return to the Council chambers at Prince Rupert City Hall.

Nor has it been much of a theme of discussion for North Coast MLA Jennifer Rice.

As the LNG proposals begin to take shape again in the Northwest you can follow along with the latest notes from our archive page here.

Email ThisBlogThis!Share to TwitterShare to FacebookShare to Pinterest
Labels: LNG and the Nass Valley