Carnvial takes a pass on the Northwest, owing to staffing and transportation issues for West Coast Amusements

For those looking to chase the thrills of the midway this year, you're actually going to have to get out of town and chase a midway down, that after word quickly spread through Social Media today that West Coast Amusements was taking a pass on the Northwest for 2019.

And indeed a glance at the WCA Calendar for May, which is when the BC based carnival usually makes their Northwest tour shows that Prince Rupert, Terrace and Kitimat have been banished from the destinations on the calendar for this year. 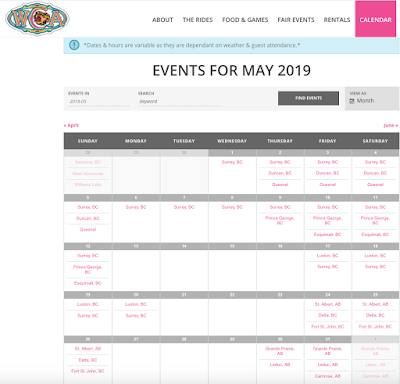 Difficulties in filling staff positions to haul the trailers of the travelling fair are to blame for their absence,  as WCA finds that this year recruitment of drivers and labourers has not allowed for it to reach as far into the province as they normally.

West Coast Amusements features three traveling units that work their way across Western Canada through the spring, summer and fall, but as they head into the start of their season, the lack of workers is making for hard decisions on which communities to leave off the list.

Another issue that may be impacting on decisions on where to travel could be found as close as a gas pump, with the Vancouver area currently featuring record high prices for fuel, a spike in price that is also being felt across the province.

It marks the first time decades that the travelling collection of thrills and spills of the midways has decided not to turn West bound when it reaches Prince George.

The tour was scheduled to bring the WCA crew to town in the first week of May.  With stops planned for Terrace and Kitimat in the week before.

Those reading the news through social media have shown some of their disappointment at the lost opportunity to ride the Midway and dip into bag after bag of mini donuts.

May 9th to 11th in Prince George now marks the closest that WCA will get to Prince Rupert for 2019, which means that residents of the Northwest will get to have the carny on the road experience if they wish to see a midway this year.

To return to the most recent blog posting of the day, click here.
Posted by . at 3:37 PM

Email ThisBlogThis!Share to TwitterShare to FacebookShare to Pinterest
Labels: Carnival cancels for 2019