As we outlined yesterday, (see here and here) the swirl of transportation announcements of Tuesday from Transportation Minister Todd Stone covered a number of funding initiatives both in Prince Rupert and the Terrace area, giving Mr. Stone the opportunity to explore much of the Northwest in one short visit.

However there was one other announcement made on Tuesday, as Ministry of Transportation officials provided an update on the major railway cross project between Terrace and Prince Rupert,  offering the first visual look at what the finished project will look like.

The project, located at Mile 28 will remove the last level rail crossing on the British Columbia stretch of Highway 16, along with the S curve that currently is the key feature of that stretch roadway.

The impressive project will be put to the tender phase shortly through the BC Bid process, with the expectation that construction will start in the Spring and be completed sometime in the summer of 2019.

The project will require the re-alignment of two kilometres of highway and the construction of a 120 metre bridge to carry traffic over the CN Rail line.

It will also include wider driving lanes and shoulders and an extensive rock bolting process to minimize rock-fall hazards on the highway. The estimated cost of the project is 37 million dollars and is funded by both the federal and provincial governments.

Below is the visual preview of the project provided by the Ministry of Transportation. 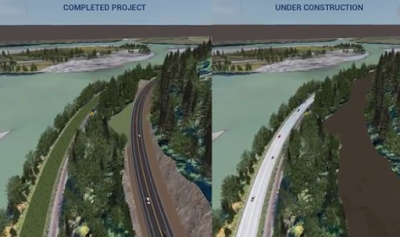 The Ministry of Transportation has also provided a video that offers another glimpse of the project.


More background on the project can be found from this item on the Ministry website.

Also announced this week was the plan to construct a replacement bridge over the Nass River south of Meziadin Junction.

Further items related to Transportation on the North Coast can be found on our archive page.
Posted by . at 8:56 AM