An incident in the early morning hours of Thursday has left residents of the community of Bella Bella fearful for some of their food and economic sources and has many raising questions about the ability of the Federal and Provincial governments to respond to environmental issues on the West coast.

A petroleum tanker barge and tug operated by the Kirby Corporation of Texas ran aground shortly after 1 AM on Thursday near Gale Pass in Seaforth Channel, as the events of Thursday progressed, the tug Nathan E. Stewart began to take on water and sank at approximately 9:50 AM with fuel continuing to flow into the water as it became submersed.

The tug and the barge combination, the latter of which was empty, were transiting along the BC Coast and were in transit from Alaska to Vancouver. The Nathan E. Stewart was holding 190,000 litres of diesel at the time of the incident.

Heiltsuk vessels were on scene through the day to monitor the situation and assist with the early spill response, but observed that the situation was beyond their ability to control.

Also noted as in the area and responding were the Canadian Coast Guard Vessels Cape St. James, Bartlett and Tully, they were able to secure the crew of the tug before the vessel sank.


The nature of the impact on the community from the fuel spill was outlined in a media release from the Heiltsuk Tribal Council.

Of note from the incident is that the spill puts at risk an area where 25 important species are harvested, included in that area of immediate concern are manila clam beds which is a key element of the economy for the region.

The full outline of the information release can be reviewed below: 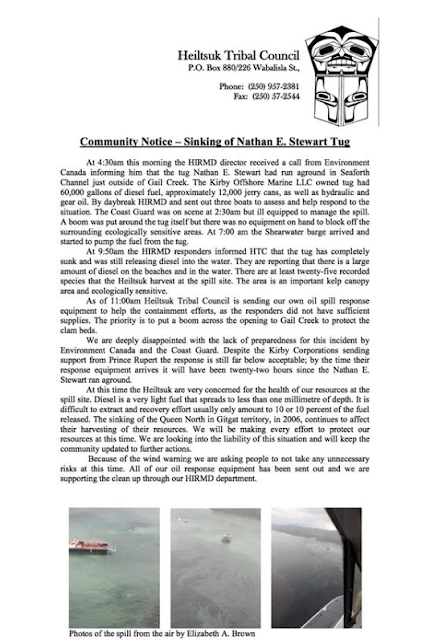 Vessels and crews from the Prince Rupert base of Western Canada Marine Response were dispatched on Thursday to attend to the fuel spill, but were not anticipated to be on site until the Friday morning.

In an information statement from Thursday, WCMR outlined that the response to the Bella Bella area will include a mobile skimming vessel, two boom skiffs, a workboat and tug and barge holding three trailers. The information statement also provided a photo of the barge, with Coast guard vessels just off the port side.

The incident has reinforced calls from those that want to see a tanker ban put in place on the West Coast of Canada, with both NDP MLA Jennifer Rice and NDP MP Nathan Cullen taking note of Thursday's events. 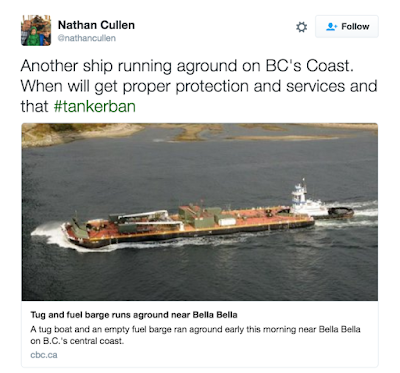 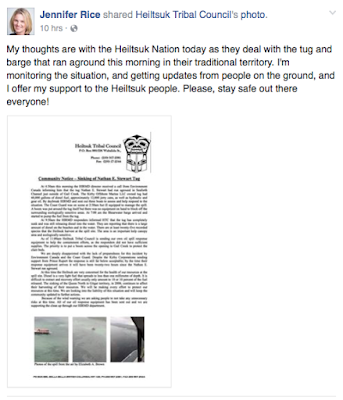 There is a collection of items to be found noting the nature of the Nathan E. Stewart's purpose, the frequency of its travels in British Columbia waters and concerns over the potential for incidents such as Thursday morning delivered.

Updates on the latest developments from the Bella Bella region can be found on the Heiltsuk Council twitter feed and Facebook page.

Some background on the current incident, the environmental response plans and the impact on the Heiltsuk Nation can be reviewed from our archive page here.