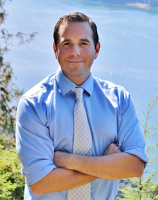 The keyboard was clicking fast at Prince Rupert City Hall today, as Mayor Lee Brain took issue with the tone and content of an item published in the weekly paper the Northern View this morning.

Only a few short hours after the Northern View had pushed publish on its website, and even before residents might find the article in their mailbox at home, the Mayor provided his response to the weekly paper's coverage of civic affairs and events from the UBCM convention.

Putting his focus on an article on infrastructure funding that Mayor Brain describes as misleading.

The article by reporter Kevin Campbell, reviewed the recent funding of infrastructure projects across British Columbia and noted that Prince Rupert was missing from the list of the first wave of funding opportunities, while an accompanying editorial expressed disappointment that the City had missed the cut.

In a note posted to the Mayor's Facebook page, Mayor Brain provides his clarifications to the Northern View article, stating that the City has not missed any opportunities for funding from a newly created water fund, adding that the City applies for a variety of grant funding through various agencies each year. 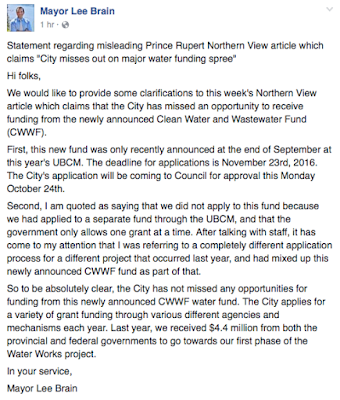 As we noted on the blog back in September, those funding announcements came as part of the week long discussions that took place during the course of the UBCM convention in Victoria, with only two Northwest projects gaining funding approval as part of the large roll out of announcements for the first wave of funding.

You can review our full coverage of the Prince Rupert delegations time at UBCM in Victoria from our archive page here.

More items related to items of interest from Prince Rupert City Council can be found on our Council discussion page.
Posted by . at 12:17 PM