A short review of the Redesign Rupert Recharge event of Saturday made for some of the notes from Monday's City Council session, as Mayor Lee Brain provided a short overview of how the Saturday event went and the engagement found between residents and facilitators.

The event made for a fair bit of conversation at Monday's session, with both representatives of ecotrust Canada and Pacific NorthWest LNG making mention of the Recharge event and noting the efforts that had gone into organizing the project.

As for the Mayor's review of events, his comments came at the end of the Monday session and noted a few of the themes from the day that he had observed at the Saturday event at the Civic Centre.

Key to Mayor Brain's thoughts from Saturday morning was the participation of the community and how it's important to the recharge process.

"The really good thing about this whole process is that the entire community came out,  en masse to participate and that is just the beginning of something much bigger that is emerging here with this redesign process ... I do want to say, that I have been hearing a lot of feedback saying you know what's going to be different, we've had meetings, we've done these types of things before, what's really is going to change. The fundamental structure of Redesign Rupert process is actually built into the design process for action to emerge from this process. So it's not going to be some report that's generated that's just given to council with 100 list of things for us to now additionally do, on top of the 100  things we already have to do"

The Mayor also observed that the process moving forward will see residents take ownership over the issues and to start the process of becoming more involved in reshaping and redesigning this town.

Adding that interested residents should drop into the Redesign offices in the Community Futures office to learn more about what the process is all about.

The Mayor also paid tribute to the number of volunteers who assisted through the day, stating that hundreds of people from the community participated in the process and even observed that the newspaper reporter had taken on the duties of the balloon distributor at the event. 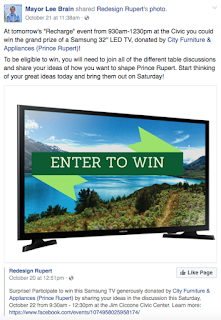 And while the weekly paper had the volume of participants at around the 150 mark, the attendance did indicate some interest in the theme for renewal for the community.

Though it should perhaps be noted, that the volume of those in attendance at the Civic Centre Saturday was no doubt assisted by the range of door prizes that were provided by local merchants for the event.

With an impressive list of items available for those that took the time on Saturday to participate.

Monday night, Mayor Brain also reminded Council of the upcoming November engagement session with the Planning Partnership, an opportunity that will allow residents to engage in redevelopment themes related to Third Avenue, Seal Cove and City held waterfront properties, adding that the economy of Third Avenue and the future for that commercial area will be part of those discussions.

He also called attention to some comments he has heard related to the funding of 75,000 dollars provided by Northern Development Initiative Trust towards the November session and further study.

"We did receive 75,000 dollars from NDIT and I will say that those who believe (and ask) how much 75,000 will do really, well I argue how much will zero dollars do, so it's better than no dollars and so we'll start with that and I'm very excited about it and I think it's going to be huge for the community"

Councillor Kinney had one note on the weekend event, reminding Council members he was unable to attend the Saturday session as he was taking care of the City's business as part of Regional District proceedings that day.

You can learn more about the work of the Redesign Rupert initiative from their website and Facebook page.

The full discussion can be reviewed from the City's Video archive starting at the one hour, five minute mark.

An extended look at the topic can be found on our City Council Timeline here.

Some of our past items related to some of the engagement plans from Redesign Prince Rupert can be found on our archive page here.