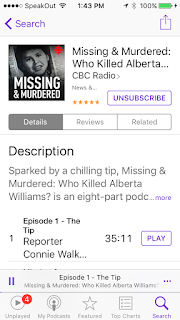 The 1989 disappearance and murder of Alberta Williams is the focus on a new audio documentary presentation which was launched by the CBC in October.

The eight part series which delivered its first installment last week is a project from the Toronto based  CBC News Investigative Unit.

Hosted by Connie Walker and produced by Marnie Luke along with the remainder of the team from CBC News, it takes a methodical look at the still unsolved murder of twenty seven years.

The format the documentary series is taking is one of an anthology approach to the case from the summer of 1989, taking its path forward by tracing the story from the disappearance of the 24 year old following a house party in Prince Rupert and the discovery of her body outside of the city.

Episode one provided some early background to the project, outlining the concept for the podcast and how it was launched by the receipt of a single email.  To set the foundation for the project, Walker offers up some notes as to how the story will roll out over the next eight weeks.

As the first episode moves forward we are introduced to Garry Kerr, the original lead RCMP investigator of the time and author of the email that sparked the podcast. He was the first investigator tasked with the case and began the process of trying to find out the circumstances of the disappearance and subsequent discovery of Ms. Williams.

Early on the podcast we are delivered a surprise, both Kerr and Alberta's sister Claudia have the same suspect in mind. The name is never provided owing to legal reasons, but the indications suggest that if those in the community that knew Ms. Williams at the time were to retrace those days, something new may come to light to provide some more answers and help to take it from the files of the unsolved.

Now retired, Kerr maintains that the Alberta Williams case can be solved and knows that there are one or more people in the region that could shed light on the case and perhaps provide that one missing item of information that may move the file and deliver some sense of closure on the story for Alberta Williams family and friends.

The story remains a case that still resonates for the community and now with the additional national exposure, it will become part of the cross Canada dialogue on the cases of the missing and murdered women and girls of Northern British Columbia.

The first episode of the Podcast and accompanying slide show can be reviewed here. You can access the podcast from iTunes as well.

Episode number two will be posted to the CBC website and released to the podcast feed tomorrow.

The series will air through November and December and will wrap up on December 13th.

The podcast is one of a number of resources that the CBC has put towards its review of missing and murdered women and girls across Canada. Included among that work is an extensive listing and status update on the progress of investigations into thirty four cases that the national broadcaster has looked into.

Both the podcast and the scope of the remainder of the CBC's work makes for a  renewed focus on the topic and comes as the upcoming inquiry into the missing and murdered women and girls prepares to move forward with its work.

The most recent information from the RCMP related to the investigations into Missing and Murdered Aboriginal women was released in 2015 you can review that document here.

Update December 21, 2016: With the completion of the 8 episode podcast there was a renewed interest found in the background to the story, with new information providing for the file to become very active again as part of the RCMP's ongoing E-Pana investigation.

You can find some of the latest item of interest on Missing  and Murdered inquiry from our archive page located on our political portal Darcy McGee.
Posted by . at 9:54 AM

Email ThisBlogThis!Share to TwitterShare to FacebookShare to Pinterest
Labels: CBC Podcast debuts on the murder of Alberta Williams