North Coast MLA Jennifer Rice spent the last few days on the water off of Bella Bella, taking in the extent of the fuel spill that came as a result of the sinking of the tugboat Nathan E. Stewart and lending a hand to those from the Heiltsuk Nation working to contain the spill that poses an environmental threat to some of the key areas of the region.

During the course of her time on the Central Coast, she posted a video to her Facebook page which delivered some of her observations on the incident, which you can review here.

In the video produced by the Heiltsuk Tribal Council, she provided some background to the response to the fuel spill, and outlined her concerns over the approach towards the containment that has been provided, highlighting the trauma she says the residents of the area will feel as a result of the impact from incident.

Her comments came prior to a situation over the weekend which saw the containment boom breaking apart, an incident which allowing for fuel to expand beyond the original zone created. A situation which those working the site eventually brought back under control, but not before a significant amount of fuel had escaped.

Ms. Rice wasn't alone on the waters near Bella Bella, BC NDP Leader John Horgan was also in the region with his reviews of the situation over the weekend, using his twitter feed to deliver his updates. 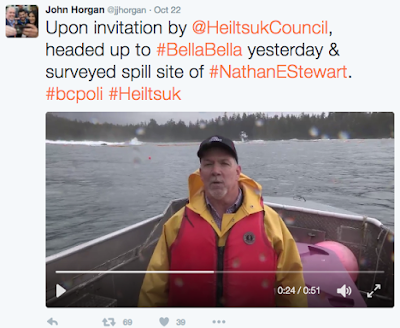 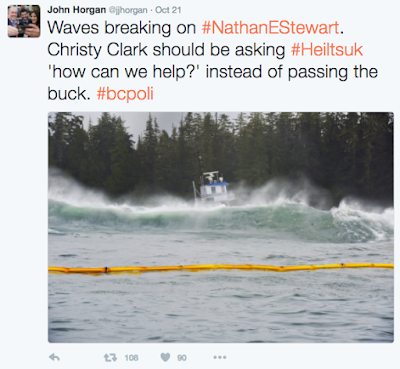 The BC NDP leader also provided his own video account of the current work taking place to contain the spill in the region.

Last week the provincial NDP was quick to criticize the BC Liberal government for the failure to deliver a "world class" oil spill response on the coast, issuing a statement that notes that five years after the term world class had first been delivered, the British Columbia government has yet to achieve that marine security from the Federal Government.

"This spill underlines the fact that five years after issuing her call for “world-class” oil-spill response on the B.C. coast, Christy Clark has failed to achieve anything close to that from the federal government. "

By using protection of our coast as a bargaining chip in pipeline negotiations, the Christy Clark government ignored the very real risks from existing traffic. The grounding of the Nathan E. Stewart amply demonstrates that neither the federal government nor the Christy Clark government are doing enough to protect our coast." -- BC NDP Leader John Horgan on the lack of a proper oil response strategy on the west coast

For its part, over the weekend the Heiltsuk First Nation issued its own statement of concern over the situation and the impact that challenging weather was having on the attempts to contain the fuel spill.

More on their observations from the scene of the spill can be found through their Facebook page.

The most recent Situation report from the Unified Command Information Site can be reviewed here.

You can find more background and updated items related to the Nathan E. Stewart fuel spill from our archive page here.