The latest plans from Transition Prince Rupert will be on the agenda tonight as the local organization that has dedicated itself towards a more sustainable community hosts their Annual General Meeting.

Existing members and newcomers alike are welcome to the event which takes place in Room 155 at Northwest Community College and starts at 7PM at the Prince Rupert Campus located on Fifth Street.

Tonight's meeting will see the Transition Prince Rupert Board provide an update on some of their recent initiatives in the region over the last twelve months, as well as to hold elections for the 2017 Board for the community organization.

One item of note that will be reviewed at tonight's session, is the status of the McKay Street project, with Board officials set to offer up some background when it comes to the recent Design event hosted by the organization in September.

An item recently posted to the Transition Prince Rupert Facebook page, notes that the group received over 85 responses to their presentation of the McKay Street Design concepts at a recent community engagement session. 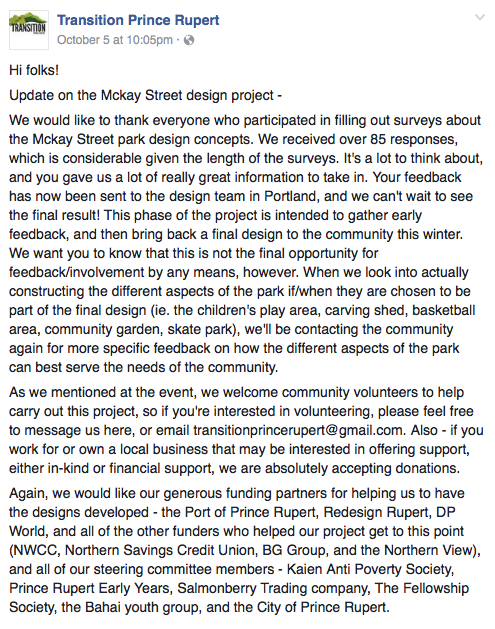 As noted in the Facebook post, the community input gathered by Transition Prince Rupert at that September event has now been forwarded to the design team in Portland, Oregon.

They will then provide a final design for the proposed redevelopment at the corner of Kootenay and McKay, that location currently hosts an abandoned baseball field once operated by the City of Prince Rupert.

Transition Prince Rupert has not expanded on what the timeline for the process might look like, as they seek to move forward on their hopes to make new use of the field.

For its part, Prince Rupert City Council members have yet to discuss the topic much at their public Council sessions and so far have not outlined what involvement the City may have when it comes to the long term plans for the proposal

You can learn more about what Transition Prince Rupert is all about from their Facebook page and website.