Nathan Cullen, the NDP MP who represents Skeena-Bulkley Valley in the House of Commons has renewed his call for the Federal government to take the lead of the United Fisherman and Allied Workers Union when it comes to changing the current fisheries policies and to accept the concept of adjacency.

The MP outlined some of his thoughts on the issue in a home mailer to constituents which arrived in many mailboxes on Monday.

In his review, Cullen made note of his work, along with that of NDP MP Fin Donnelly who is the NDP fisheries critic, to address the issue that is of key concern for those that work in the North Coast fishing industry.

Cullen recounts the summer hearings that took place, which saw both industry and representatives of local shore workers provide background information to the federal Parliamentarians  and the call from the local workers to change the Federal policies when it comes to the regulations in place.

He also, echoes the goal of UFAWU-Unifor to have fish that is caught on the North Coast processed in the region. That issue of adjacency has been a key discussion point for local workers for a number of years, made more urgent since the Canadian Fish Company began its process of shutting down the canning lines in Prince Rupert last year.

"We must change these flawed made-in-Ottawa policies that are devastating our coastal communities. Forcing the government to hear directly from our people at parliamentary hearings was just step one.

You can review the full content of the fishing issue notes from the home mailer below: 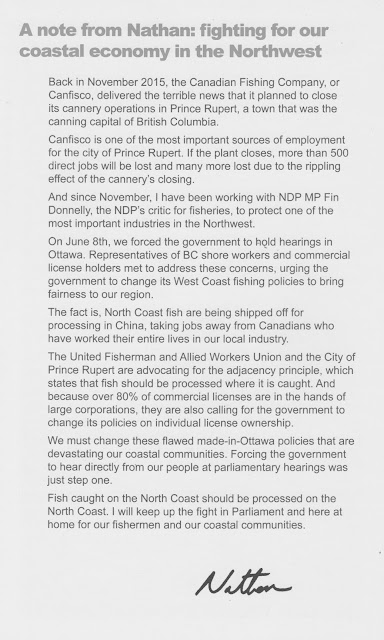 Last week, Prince Rupert City Councillor Joy Thorkelson, who is also the Northern Representative for UFFAWU-Unifor provided an update on the past salmon season on the North Coast.

The union rep provided a glimpse for Council members into the impact for shore workers and the community of the lost hours that were suffered as a result of the end of the canning operations at the Canadian Fish Plant in the city.

More background on the North Coast Fishing industry can be found on our archive page.

Further items of interest for the Northwest from the MP or notes out of Ottawa related to the riding can be found on our House of Commons Archive page.
Posted by . at 9:12 AM

Email ThisBlogThis!Share to TwitterShare to FacebookShare to Pinterest
Labels: Nathan Cullen continues call for adjacency in the North Coast fishery