The National Aboriginal Television network APTN has turned some of its attention towards the story of Lelu Island, using its APTN Investigates program to focus on the story of those who are opposed to the development of an LNG Terminal on the island near Flora Bank.

The thirty-five minute documentary style review traces some of the history of the story to this point and highlights the divisive nature of the issue that can be found at Lax Kw'alaams.

In addition to the now well known themes of opposition from those that are currently occupying the proposed LNG site, reporter Rob Smith notes the change of Band Council government of 2015 and how once they were settled in office, Mayor John Helin and his Council had reversed the path previously held by the community when it comes to the proposed LNG development.

Through interviews with a number of residents of the region, Smith outlines some of the concerns that some in the community had when it came to the process and results of the second vote held in August of this year.

It was that consultation which delivered the approval of 66 per cent  of those that voted (532 out of the 812 ballots cast) and set in motion plans from Lax Kw'alaams to continue engagement with Pacific NorthWest LNG. 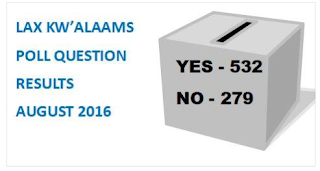 Much of the documentary features a look at the opposition to the project from Hereditary Chief Donald Wesley (Smoyget Yahaan) and examines some of the background to recent suggestions that his Hereditary status may not valid.

However, the reporter also gains some comment from Mayor John Helin, (though it appears to have taken a few attempts), who offers up some background as to how the Band Council has interpreted that vote and what areas of engagement on LNG that the community has authorized the Band Council to follow through on.

Other issues reviewed over the thirty minutes is how the Port of Prince Rupert views the current occupation of the Island as well as the latest development from the Lelu Island story, that of the court challenge taken to the Vancouver Law Courts last Thursday.

You can watch the full documentary piece here.

More notes on the Pacific NorthWest LNG project can be found here, while notes of interest from Lax Kw'alaams can be found on our archive page here.
Posted by . at 9:03 AM