There will soon be an empty storefront to be found on the 500 block of Third Avenue West, with Carter's Jewellers posting the Store Closing signs recently, preparing to sell off some of their stock before they make an exit from the Prince Rupert marketplace.

Carter's Jewellers which has a string of stores in Smithers, Terrace, Prince George and Quesnel is winding down it's Prince Rupert operations, with signs proclaiming the pending departure, along with the prospect of some in store bargains as they pack up the boxes.

As they prepare to close their doors they will bring a three year run on the North Coast to an end, arriving on the Prince Rupert commercial scene in October of 2013, taking over the location that hosted the long established Manson's Jewellers which had closed in September of 2013.

No date has been announced as to when the final day for sales on the North Coast may be, updates perhaps to be posted to their Facebook page as they wind things down in Prince Rupert. 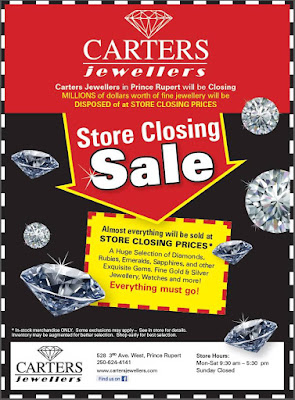 With the Liquidation signs going up, Carter's now joins Fields in the exit of chain stores from the community in recent months.

You can find more background on developments with the city's commercial options from our archive page here.
Posted by . at 9:16 AM