An incident on the streets of the city just after the midnight hour on October 30 has the Prince Rupert RCMP asking the assistance of the public, as detachment members seek out more information related to a motor vehicle collision.

Prince Rupert RCMP issued some background to their investigation on Monday, which is looking into the travels of a lone truck through the downtown area, having struck a building as it was driven up 5th street.

As the vehicle was leaving the scene, it also struck two street signs during the course of its journey before the occupants fled the scene.

Police later located and recovered the abandoned vehicle a short distance away.

One male was taken into custody and has subsequently been released by Police.  The RCMP notes that it was fortunate that no one was injured owing to the large volume of foot traffic in the area at the time. 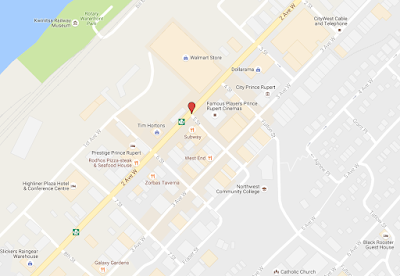 While the RCMP have already spoken to a number of witnesses to the incident, they are still compiling more information as part of their investigation and are looking for anyone else who may have been in the area during that period to contact them at 250-627-0700 or through Crimestoppers at 1-800-222 -TIPS

The information release related to the incident can be reviewed here.

For more items from the files of Northwest emergency responders see our archive page here.
Posted by . at 4:01 PM