Update:  No injuries were reported from Tuesday night's fire, however 10 residents were forced from their homes as a result of the incident, the cause of which is currently being investigated by the Prince Rupert Fire.

Smoke filled the air during the supper hour in the downtown core as units from Prince Rupert Fire/Rescue tackled a fire in an apartment building in the block between Sixth and Seventh Streets on Second Avenue West.

Prince Rupert RCMP have access to the block cordoned off and were redirecting traffic along the busy stretch of the downtown core towards Third Avenue while the Fire Department worked the fire, attacking the fire scene from two directions.

Responding to the fire call which came in around 6 PM were the aerial unit and pumper truck, as well as the Rescue Squad and Command Vehicles.

The building which is located in the middle of the block, adjacent to McElhanney Engineering features two storeys above street level, along with a basement area and hosts a number of apartments, it's not know if anyone was in the building when the fire broke out.

Fire crews continue to work the scene into Tuesday evening. 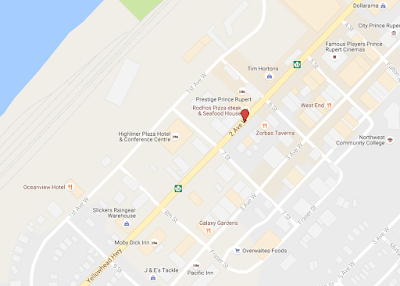 More notes on Emergency Response files in the Northwest can be found on our archive page.