When the delegates to the annual gathering of British Columbia politicians known as the UBCM convention gather in Vancouver this September, they may find a bit of controversy over a planned hospitality event carrying over from the summer.

The convention which brings together municipal, regional, provincial and even the occasional Federal politician, is set to take place from September 23 to 27 at the Vancouver Convention Centre.

The Prince Rupert contingent to the annual gathering is normally a large one with most, if not all members of Council, as well as senior staff members making the annual week-long trip to the south.

This year however, the past practice of a wine and dine reception sponsored by the Chinese government is proving to be a hot topic for a number of municipal leaders heading towards convention time.

The Chinese government which has hosted the event since 2012, has paid a reported $6,000 to be an official sponsor of this years UBCM convention as well as to host the reception.

It's an arrangement that some municipal politicians are not comfortable with at the best of times, but particularly in the current political climate where the Chinese government continues to hold a pair of Canadians hostage.

Those detentions are part of a lashing out by the Chinese  at Canada over the detention of Meng Wanzhou, a senior executive with the Chinese communication company Huawei.

After Canada detained Ms. Wanzhou last December as part of an extradition request from the United States, the Chinese government arrested Canadians Michael Korvig and Michael Spavor on December 10th, holding them in a Chinese prison with little access to Canadian officials.

That move has been viewed by most as blatant retaliation against Canada for the arrest and detainment of Ms. Wanzhou, who is the daughter of the Huawei founder.

As of today, Mr. Korvig and Mr. Spavor have been detained in custody by the Chinese for 222 days.

A third Canadian had a previous conviction of a fifteen year sentence on drug related charges reviewed and his sentence was then changed to that of the death penalty, a sentence that he continues to appeal

Ms. Wanzhou on the other hand, is subject to a relatively relaxed form of house detention, allowed to leave her Vancouver residence daily as she awaits the progress of her detention hearing and potential extradition to the USA.

Much of leadership in the fight to bring an end to the concept of the UBCM taking money from foreign governments has been led by Port Coquitlam Mayor Brad West.

He has expressed his outrage at the idea of municipal politicians schmoozing with the Chinese government representatives, all while the Canadian hostages remain behind bars.

Mr. West took note of the latest move from Port Coquitlam of yesterday, which saw his community pass a motion which calls for the practice of taking money from the Chinese or any other foreign government to be brought to and end. 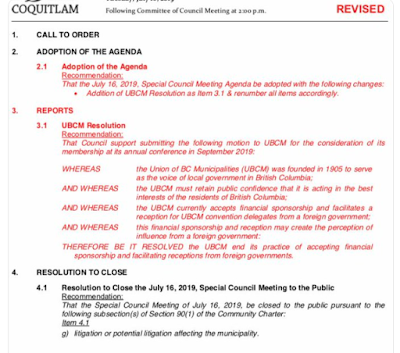 For its part, while sticking to its plan to allow the Chinese hospitality reception to move forward this year,  the UBCM has advised that they have appointed a panel to undertake a review of how they finance the annual convention.

"Over the past few weeks there have been a number of comments from elected officials with regard to the Chinese consular reception. What we have heard is that there's a range of opinion about the event - some support it, and others would like to see it cancelled. The consensus of our executive is that the event should be retained this year" -- Arjun Singh, President of the UBCM

So far, the issue of the Chinese Hospitality Suites and the fate of the Canadian hostages currently in Chinese jails has not resonated all that much publicly with the elected officials in the Northwest.

The percolating issue has not generated any traction through the social media fields of those on Prince Rupert Council, or many of the other communities in the region.

Smithers Mayor Taylor Bachrach, who as the NDP candidate is currently in the days of preparation for the upcoming Federal election, did dip a toe into the controversial waters a few weeks ago.

In a June 23rd note through Twitter Mr. Bachrach noted that he was not a fan of the endorsement of the Sponsored Hospitality suites concept by UBCM. 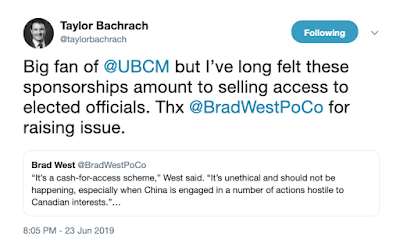 It might be a timely moment for the rest of his compatriots at the Municipal and regional level across the Northwest, to offer up their thoughts on the issue as well.

Sharing with the public whether they believe there is any value in that level of communication with the Chinese representatives during the current political climate.

The Mayor and City Council members in Prince Rupert will have an opportunity on Monday to put their thoughts on the public record if they wish, as they host their only Council session of July.

Time however is growing short to hear of their thoughts on the issue, with Council now on its more relaxed summer schedule of public sessions, with only one meeting each in August and September scheduled before the gang all heads off to convention time.

As it appears that the Chinese Hospitality Suite will remain open for business, those Mayors and councillors heading to Vancouver this September may wish to send a message to the Chinese government.

Something to inform them that they are on the wrong side of the human rights story when it comes to the Canadian hostages.

The positioning statement of UBCM is that of "the Voice of Local Government" if the membership of the organization is up to the challenge, perhaps they could be the "Voice of the Canadian hostages"

Towards that theme, our elected officials and the staff members along for the trip could do one simple thing to send a message to the Chinese government.

Just don't show up ... An Empty Hospitality Suite where the Wine goes warm, the Beer goes flat and the Free Food untouched might be the Strongest Message that the Chinese need to hear that it will Never Be Business As Usual until those Canadian hostages come home.

For more background on the ongoing diplomatic row between Canada and China see our D'Arcy McGee blog, where our Ottawa Observations archive has been tracking the situation since December 5th.

The diplomatic battle has been chronicled through our listings from December of 2018 and through 2019.

More items of interest related to Municipal politics can be found from our archive page here.


To return to the most recent blog posting of the day, click here.
Posted by . at 10:59 AM