Those looking to travel along the Alaska Marine Highway will be cooling their heels for the next little, that as the Inlandboatman's Union of the Pacific, which represents workers on the ships walked off the job on Wednesday afternoon.

"At this time, we are focused on the safety of passengers, crew and vessels. We are reaching out to ticketed passengers to work with them to reschedule, or offer refunds for tickets. We are working to return ships to safe harbor with adequate shore side support." -- A portion of a statement from the Alaska Marine Highway following the start of strike action earlier today

In an update for travellers issued by the AMHS, the ferry operators outlined that the vessels will not be sailing until further notice and that staff are working through the logistics of getting passengers rerouted.

The next sailing into the AMHS Prince Rupert Ferry Terminal at Fairview was scheduled for this Friday when the MV Malaspina was to arrive at noon from Ketchikan, the vessel was to depart that same day at 3PM. 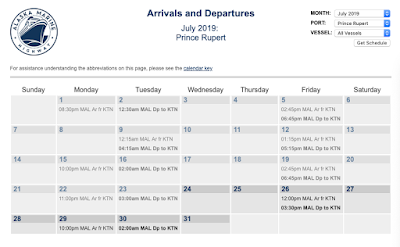 The telephone lines to AMHS reservations clerks have been reported as featuring a heavy volume of calls at the moment.

Service Notices related to now cancelled sailings can be found here, or by contacting the AMHS at 1-800-642-0066.

The Notice to Travellers from the Alaska Department of Transportation and Public Facilities can be viewed here.

Yesterday, Alaska Public Radio station KRBD noted that contract negotiations between the union and the AMHS had broken down with the 400 IBU members preparing for strike action if required. The KRBD story notes that the most recent contract proposal had been rejected by 86 percent of the membership.

This background piece from the KRBD item provides a look at the range of issues that have led to the strike action that was taken earlier today.

The Inlandboatman's union is an affiliate of the International Longshore and Workers Union.

More notes on AMHS service to and from Prince Rupert can be found here.

Email ThisBlogThis!Share to TwitterShare to FacebookShare to Pinterest
Labels: AMHS boats to be tied up as Strike action commences