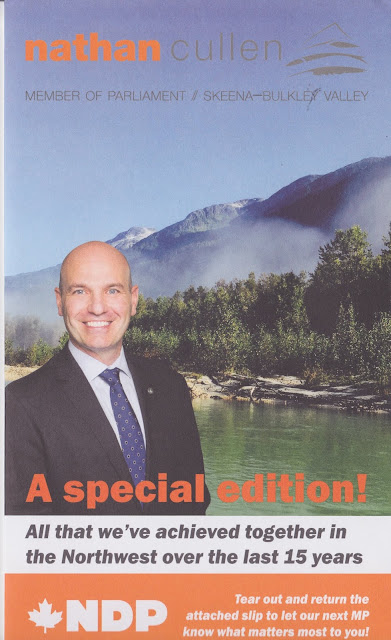 What may be the final bit of mail you receive from Skeena-Bulkley Valley MP Nathan Cullen is currently making its way into mailboxes across Northwestern BC, as the soon to be departing MP for the region makes for a summer of farewell messages.

The mailer campaign this time around is focused on some of the past journey that the MP and his constituents have shared, complete with a number of photos of a younger Mr. Cullen with Jack Layton or advocating many of the environmental issues that were found during the course of his fifteen years in elected office.

He also draws some attention to some local initiatives that gained some traction in the House of Commons such as his Create Your Canada program which spanned ten years and was a vehicle for community engagement across the Northwest, as well as a short synopsis of some of the economic changes that have come to Skeena-Bulkley Valley riding during his time in office. 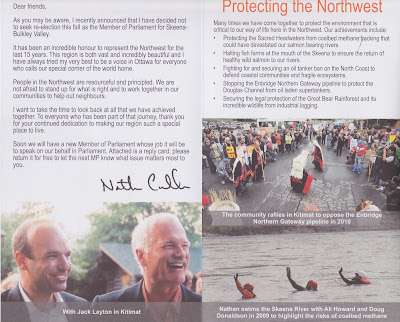 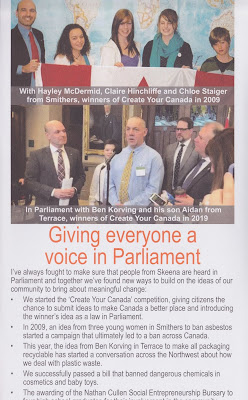 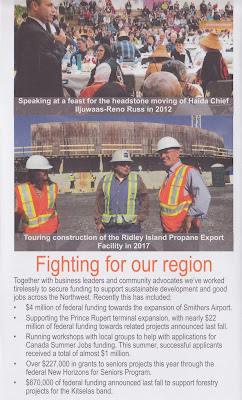 Mr. Cullen also notes that there is a reply card as part of the summer mailing, that is designed to "Let us know! What is most important to you?"

The survey comes with a promise to deliver the results to the next MP, which one imagines the current MP hopes will be the NDP candidate for this fall's election, otherwise the hand off of data may require a stamp or two ...

The summer mailer wraps up with a list of some of the community BBQ events that Mr. Cullen plans to host as he winds down his term of Office on the federal scene ... for now?

Among some of the stops ahead:

While Mr. Cullen is on his Summer of Farewells tour, the candidates for the fall election campaign will also be criss-crossing the expanse that is Skeena-Bulkley Valley, you can follow the latest notes from the campaign trail from our Fall Election Archive page here.


To return to the most recent blog posting of the day, click here.
Posted by . at 9:52 AM